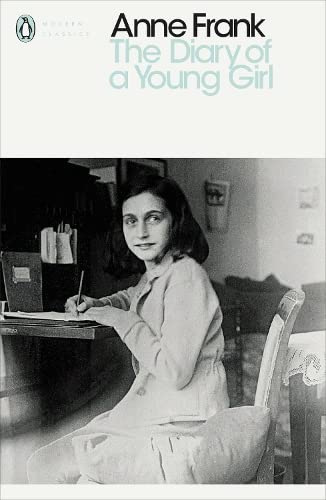 The Diary of a Young Girl
by Anne Frank

Out of Stock
£4.49
Presents the diary of a teenage girl, who along with her family in Amsterdam, in the summer of 1942 was forced into hiding by Nazis. This title presents an intimate record of tension and struggle, adolescence and confinement, anger and heartbreak.
Very Good Good Well Read
Only 0 left

The Diary of a Young Girl Summary

The Diary of a Young Girl: The Definitive Edition by Anne Frank

Anne Frank's The Diary of a Young Girl is an inspiring and tragic account of an ordinary life lived in extraordinary circumstances that has enthralled readers for generations. This Penguin Modern Classics edition is edited by Otto H. Frank and Mirjam Pressler, translated by Susan Massotty, and includes an introduction by Elie Wiesel, author of Night.

In Amsterdam, in the summer of 1942, the Nazis forced teenager Anne Frank and her family into hiding. For over two years, they, another family and a German dentist lived in a 'secret annexe', fearing discovery. All that time, Anne kept a diary. Since its publication in 1947, Anne Frank's diary has been read by tens of millions of people. This Definitive Edition restores substantial material omitted from the original edition, giving us a deeper insight into Anne Frank's world. Her curiosity about her emerging sexuality, the conflicts with her mother, her passion for Peter, a boy whose family hid with hers, and her acute portraits of her fellow prisoners reveal Anne as more human, more vulnerable and more vital than ever.

If you enjoyed The Diary of a Young Girl, you might also like Hannah Arendt's Eichmann in Jerusalem: A Report on the Banality of Evil, available in Penguin Classics.

'One of the greatest books of the twentieth century'
Guardian

Anne Frank was born on 12 June 1929. She died in Bergen-Belsen, three months short of her sixteenth birthday. Elie Wiesel (1928 - 2016) was born in Sighet, Transylvania, which is now part of Romania. He was fifteen years old when he and his family were deported by the Nazis to Auschwitz. After the war, Elie Wiesel studied in Paris and later became a journalist. During an interview with the distinguished French writer, Francois Mauriac, he was persuaded to write about his experiences in the death camps. The result was his internationally acclaimed memoir, La Nuit or Night, which has since been translated into more than thirty languages.

GOR001209035
The Diary of a Young Girl: The Definitive Edition by Anne Frank
Anne Frank
Penguin Modern Classics
Used - Very Good
Paperback
Penguin Books Ltd
2000-03-30
368
014118275X
9780141182759
N/A
Book picture is for illustrative purposes only, actual binding, cover or edition may vary.
This is a used book - there is no escaping the fact it has been read by someone else and it will show signs of wear and previous use. Overall we expect it to be in very good condition, but if you are not entirely satisfied please get in touch with us.