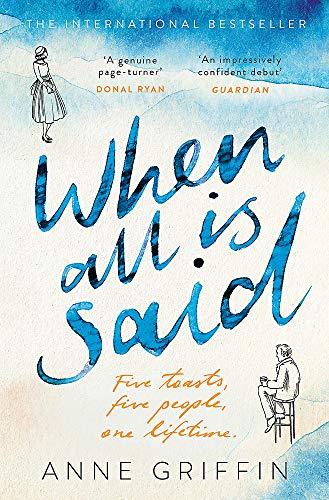 When All is Said by Anne Griffin

When All is Said: Five toasts. Five people. One lifetime. by Anne Griffin

'This is how you tell a story' Cecelia Ahern

'An extraordinary novel, a poetic writer, and a story that moved me to tears.' John Boyne

'I'm here to remember - all that I have been and all that I will never be again.'

At the bar of a grand hotel in a small Irish town sits 84-year-old Maurice Hannigan. He's alone, as usual -though tonight is anything but. Pull up a stool and charge your glass, because Maurice is finally ready to tell his story.

Over the course of this evening, he will raise five toasts to the five people who have meant the most to him. Through these stories - of unspoken joy and regret, a secret tragedy kept hidden, a fierce love that never found its voice - the life of one man will be powerfully and poignantly laid bare.

Heart-breaking and heart-warming all at once, the voice of Maurice Hannigan will stay with you long after all is said.

'Beautifully written, unhurried and thoughtful, and a character you love from the off' Kit de Waal

[An] impressively confident debut ... Maurice Hannigan emerges as an engaging, compassionate creation * Guardian *
Anne Griffin's debut novel is a must read. Beautifully observed, masterful story telling - stunning! -- Graham Norton
There is something special here . . . The next big name to emerge from the Irish writing scene. -- John Boyne
Griffin is a magical storyteller whose prose is effortless and clear. She conjures an intimate, poignant and ultimately enthralling portrait of a man who has battled loneliness and other demons throughout his life. Maurice is superbly well-realised: a character who tries to make amends and, in so doing, cracked my heart. -- Fanny Blake * Daily Mail *
A book to savour, and pass on. An absolute joy * Sunday Mirror *
A hugely enjoyable, engrossing novel, a genuine page-turner. -- Donal Ryan
Maurice Hannigan is a wonderful invention, whose bitter-sweet meditations will stay long in the reader's mind. Anne Griffin has fashioned a rare jewel. -- John Banville
This is how you tell a story -- Cecelia Ahern
[Anne Griffin] builds a remarkably rich sense of place, while also tracing the wider changes affecting Ireland. ...Maurice is a lovingly rendered example of the current vogue for characters who have fallen through the cracks * Sunday Times *
Beautifully written, unhurried and thoughtful, and a character you love from the off. -- Kit de Waal
As candid a portrait of human frailty as you're likely to find. Griffin is uncannily accurate in her depiction of that peculiarly Irish emotional paralysis we're all familiar with. * Sunday Independent *
Pitch-perfect prose ... Moving and beautifully written, this is a wonderfully assured debut. * Mail on Sunday *
A proper tear-jerker, but one that will ultimately leave you feeling hopeful * Grazia *
A warm and wise treasure of a book with a character whose voice draws you in from the start * The I *
A rich and moving story, a poetic voice and unforgettable character in Maurice * Elle *
It's all beautifully done; a tale told in the plain but poetic prose of a man who recognises the tragic truths gleaned from a life of love and loss. A gem of a book * Sunday Express *
This could be one of the big book hits of 2019 * Red Magazine *
An atmospheric debut ... The most impressive aspects of this first novel are its rich, flowing prose, it's convincing voice and it's imaginative and clever structure ... Griffin is a welcome arrival to the literary scene * Irish Times *
Griffin's strength is in voice and in the rhythm of her prose ... She is excellent at interrogating the complexity of Maurice's barriers * Irish Independent *
A rich, fluid debut novel * The I Newspaper *
A heartfelt and impressive debut novel * Sunday Business Post *
Poetic and touching without being sentimental, When All Is Said by Anne Griffin is something special. * Good Housekeeping *
An emotional yet uplifting novel - we defy you not to fall in love with Maurice Hannigan and his heart-warming story. * Woman's Weekly *
Will stay with you long after you close the cover * Irish Mail on Sunday *
Beautifully written, this is a feast of Irish storytelling * Choice *
A powerful page-turner ... wonderfully poetic, atmospheric and moving. -- Dierdre O'Brien * Best *
When All Is Said captures the texture of a night catching up with an old friend - the pleasures and comforts, the stories and surprises - one that you never want to end, and all the more bittersweet because you know, of course, that it must. -- Kathleen Rooney
Maurice Hannigan is one of those rare and unforgettable characters whose lives we enter, inhabit for a time all too brief, and emerge from deeply changed. Anne Griffin is a writer with a bright, bright future. -- Janet Peery
A warm and nourishing story from a writer of much promise. * RTE Guide *
Griffin's debut is a beautiful and poignant page-turner. * Image Magazine *
A fine literary debut from a writer I'm sure we'll hear more from * Mature Times *
Superb ... incredibly moving without ever straying into sentiment * People *
[Maurice's] story will make you laugh and cry - When All Is Said is a wonderful debut novel from Anne Griffin. She says she "wanted to write a damn good story". She has succeeded beyond her dreams. * My Weekly *
When All Is Said tells the tale of an imperfect man who you will not be able to forget. * Irish Country Magazine *
A beautifully written, perfectly paced, heartfelt novel * Saga *
Tissues at the ready for what is a confident yet carefully written debut . . . I adored it. Utterly recommended. * Woman's Way *
Achingly poignant and wryly funny, Irish author Anne Griffin's luminous debut is a celebration of stolen joy and lost opportunities * Waterstones Weekly *
A heart-warming, heart-breaking and poignant debut of rare power. * NetGalley Books of 2019 *
Griffin's stunning debut, brimming with irresistible Irish-isms, is an elegy to love, loss and the complexity of life. * People Magazine *
An accomplished debut. A sensitive layered description of grief and regret . . . excellent * Minneapolis Star Tribune *
Beautifully realized * LitHub *
A portrait of a life in which revenge, love, loss, and misunderstanding all play their part . . . This is a wonderful piece of story-telling that is intimate, compassionate and extraordinarily assured. -- Summer Holiday Reads * Daily Mail *
Anne Griffin's first novel has taken Ireland by storm . . . Immediate, often funny, sometimes dark and, on occasion, devastatingly sad. -- Audio book review * The Times *
Nearly 40 years of publishing has made me a cynical reviewer of books, but, oh my god, it's impossible to be churlish about discovering such a fabulous and unforgettable character. A one-hit wonder this is not * NB Magazine *
A gentle tale of an irascible Irish farmer, who spends the last day of his life toasting the five people who have meant the most to him- sure to move even the stoniest of hearts * Independent *

Anne Griffin is the winner of the John McGahern Award for Literature. Shortlisted for the Hennessy New Irish Writing Award and The Sunday Business Post Short Story Competition, Anne's work has been featured in, amongst others, The Irish Times and The Stinging Fly. She's worked in Waterstones branches in both Dublin and London, and for various charities.
Born in Dublin, Anne now lives in Mullingar, Ireland, with her husband and son. When All is Said is her debut novel.

GOR009940528
9781473683020
1473683025
When All is Said: Five toasts. Five people. One lifetime. by Anne Griffin
Anne Griffin
Used - Very Good
Paperback
Hodder & Stoughton
2019-06-27
272
N/A
Book picture is for illustrative purposes only, actual binding, cover or edition may vary.
This is a used book - there is no escaping the fact it has been read by someone else and it will show signs of wear and previous use. Overall we expect it to be in very good condition, but if you are not entirely satisfied please get in touch with us
Trustpilot