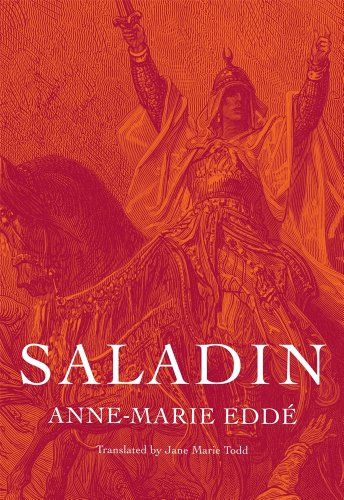 In Stock
£8.49
"Saladin" represents the best kind of biography a portrait of a man who is said to have made an age, and the most complete account we have to date of an age that made the man. The result is a unique view of the Crusades from an Arab perspective, and an erudite biography of a political figure whose image was layered in myth with the passage of time.
Like New Very Good
Only 1 left

Working simultaneously on two levels, Saladin represents the best kind of biography--a portrait of a man who is said to have made an age, and the most complete account we have to date of an age that made the man. Unlike biographies that focus on Saladin's military exploits, especially the recapturing of Jerusalem from European Crusaders in 1187, Edd 's narrative draws on an incredible array of contemporary sources to develop the fullest picture possible of a ruler shaped profoundly by the complex Arabian political environment in which he rose to prominence. The result is a unique view of the Crusades from an Arab perspective.

Saladin became a legend in his own time, venerated by friend and foe alike as a paragon of justice, chivalry, and generosity. Arab politicians ever since have sought to claim his mantle as a justification for their own exercise of power. But Saladin's world-historical status as the ideal Muslim ruler owes its longevity to a tacit agreement among contemporaries and later chroniclers about the set of virtues Saladin possessed--virtues that can now be tested against a rich tapestry of historical research. This tension between the mythical image of Saladin, layered over centuries and deployed in service of specific moral and political objectives, and the verifiable facts of his life available to a judicious modern historian is what sustains Anne-Marie Edd 's erudite biography, published to acclaim in France in 2008 and offered here in smooth, readable English translation.

How, asks medieval historian Anne-Marie Edd , did a "relentless jihad fighter" ultimately come to be identified as a "valiant, generous, and magnanimous" figure among his former foes? Her comprehensive biography, Saladin, examines the birth and elaboration of a legend that casts a shadow even into the present day. In it, she highlights the conflict that can arise when our quest for historical truth runs up against the carefully constructed image that people of the past wanted us to see...The Saladin of legend is a palimpsest on which the agendas and concerns of whoever invoked him were inscribed. Edd untangles the concrete facts from the endless revisions and reinterpretations that turned Saladin into a larger-than-life icon over the ages.-- (11/07/2011)

Anne-Marie Edd is Director of Research at the Centre National de la Recherche Scientifique (CNRS), Paris, and was Professor of Medieval History at the University of Reims.

GOR010302997
Saladin by Anne-Marie Edde
Anne-Marie Edde
Used - Like New
Paperback
Harvard University Press
2014-05-09
704
067428397X
9780674283978
N/A
Book picture is for illustrative purposes only, actual binding, cover or edition may vary.
The book has been read, but looks new. The book cover has no visible wear, and the dust jacket is included if applicable. No missing or damaged pages, no tears, possible very minimal creasing, no underlining or highlighting of text, and no writing in the margins.