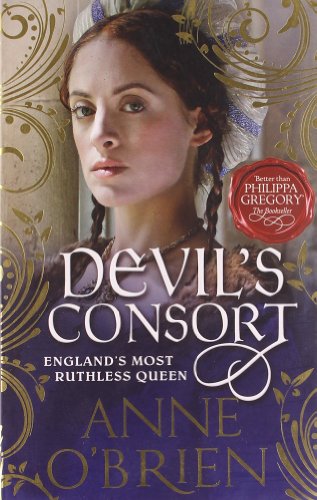 Anne O'Brien's new novel, Queen of the North, is available to pre-order now

July, 1137. In the baking sunshine of Bordeaux, Eleanor, Duchess of Aquitaine, eagerly awaits her first meeting with the prince who will become her husband.

But Louis Capet is no fit match for educated, independent Eleanor. When he inherits the throne of France, it becomes clear that his monastic ways and indecisive rule could cost him his country - and his marriage.

Determined to rule her own lands, Eleanor leads the men of Aquitaine on Crusade. The march to Outremer will make her the most scandalous woman in all of Christendom.

And one chance meeting between Eleanor and Henry Plantagenet will change the fate of England - forever...

`O'Brien cleverly intertwines the personal and political in this enjoyable, gripping tale.'
- The Times

`A gem of a subject ... O'Brien is a terrific storyteller'
- Daily Telegraph

`Packed with drama, danger, romance and history.'
-Pam Norfolk, for the Press Association

`Better than Philippa Gregory' - The Bookseller

`Packed with drama, danger, romance and history, The Queen's Choice is the perfect reading choice for the long winter nights.'
- The Press Association

Anne O'Brien was born in the West Riding of Yorkshire. After gaining a BA Honours degree in History at Manchester University and a Master's in Education at Hull, she lived in the East Riding for many years as a teacher of history.

She now lives with her husband in an eighteenth-century timber-framed cottage in depths of the Welsh Marches in Herefordshire on the borders between England and Wales.

GOR002661574
9780778304272
0778304272
Devil's Consort by Anne O'Brien
Anne O'Brien
Used - Very Good
Paperback
Mira Books
2011-04-15
624
N/A
Book picture is for illustrative purposes only, actual binding, cover or edition may vary.
This is a used book - there is no escaping the fact it has been read by someone else and it will show signs of wear and previous use. Overall we expect it to be in very good condition, but if you are not entirely satisfied please get in touch with us
Trustpilot