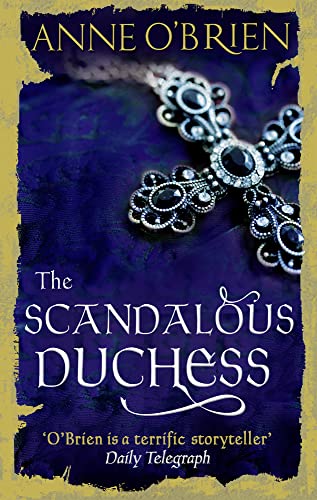 The Scandalous Duchess by Anne O'Brien

'O'Brien cleverly intertwines the personal and political in this enjoyable, gripping tale.'
-The Times

The Scandalous Duchess by Anne O'Brien

'O'Brien cleverly intertwines the personal and political in this enjoyable, gripping tale.'
-The Times

Widow Lady Katherine Swynford presents herself for a role in the household of merciless royal prince John of Gaunt, Duke of Lancaster, hoping to end her destitution. But the Duke's scandalous proposition leaves her life of pious integrity reeling...

Seduced by the glare of royal adoration, Katherine becomes John's mistress. She will leave behind everything she has stood for to play second fiddle to his young wife and ruthless ambition. She will live in the shadows of the most powerful man in England in the hope of a love greater than propriety.

But soon the court whispers - whore, harlot, vile temptress - reach the ears of not just John's bride but his most dangerous political enemies. As the Plantagenet prince is accused of bringing England to its knees, who better to blame than shameless she-devil Katherine Swynford?

Dragged from the shadows, Katherine must answer for her sins.

'O'Brien cleverly intertwines the personal and political in this enjoyable, gripping tale.'
- The Times

'A gem of a subject ... O'Brien is a terrific storyteller'
- Daily Telegraph

'Packed with drama, danger, romance and history.'
-Pam Norfolk, for the Press Association

'Better than Philippa Gregory' - The Bookseller

'This book has everything - royalty, scandal, fascinating historical politics and ultimately, the shaping of the woman who founded the Tudors.' - Cosmopolitan

'Packed with drama, danger, romance and history, The Queen's Choice is the perfect reading choice for the long winter nights.'
- The Press Association

As a prolific reader and ex-history teacher, Anne O'Brien has been lucky to fulfil her ambition to write historical romances. Her first success was a 400 word love story about a garden for Mills & Boon - an auspicious start! Anne lives with her husband in an eighteenth-century cottage. It is a place that gives her much inspiration and many sources for her writing. Anne often makes time to visit old houses, gardens and priories to absorb atmosphere for her novels.

GOR006614609
9781848453852
184845385X
The Scandalous Duchess by Anne O'Brien
Anne O'Brien
Used - Very Good
Paperback
HarperCollins Publishers
2015-02-20
544
N/A
Book picture is for illustrative purposes only, actual binding, cover or edition may vary.
This is a used book - there is no escaping the fact it has been read by someone else and it will show signs of wear and previous use. Overall we expect it to be in very good condition, but if you are not entirely satisfied please get in touch with us
Trustpilot