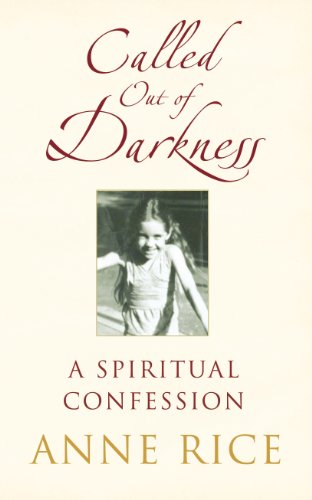 Called Out of Darkness
by Anne Rice

Internationally bestselling author, Anne Rice, has written twenty-eight novels - magnificent tales of other worldly beings that explore the realms of good and evil, love and alienation: each a reflection of her own moral journey.

Called Out of Darkness Summary

Called Out of Darkness: A Spiritual Confession by Anne Rice

Internationally bestselling author, Anne Rice, has written twenty-eight novels - magnificent tales of other worldly beings that explore the realms of good and evil, love and alienation: each a reflection of her own moral journey. Now, in her powerful memoir, she writes about her own life as a Catholic.

Beginning with her New Orleans childhood, in a vividly experienced world of storytelling and ritual, Rice's faith was formed. As a teenager, struggling to reconcile her faith with her hunger for knowledge and understanding of the modern world, she turned her back to the religion of her childhood and lost her belief in God. Years later, after the tragic passing of her daughter, she wrote Interview with the Vampire,a lament for her lost faith.

Rice describes a turning point in 1998, when, after nearly four decades as an atheist, she returned to the religion of her childhood. Hers is a faith that has survived even her husband's death and the divisive nature of contemporary religious debate. This is her spiritual confession.

Anne Rice is the author of more than thirty internationally bestselling books including the Mayfair Witches sequence, Songs of the Seraphim and the Wolf Gift Chronicles. The phenomenon that became the Vampire Chronicles began with Interview with the Vampire in 1976, later made into a film starring Tom Cruise and Brad Pitt, and culminated with Blood Canticle in 2003. Prince Lestat, published in 2014, and Prince Lestat and the Realms of Atlantis, published in 2016, were the first new Vampire Chronicle novels for over a decade. Anne Rice lives in California.

GOR002628048
Called Out of Darkness: A Spiritual Confession by Anne Rice
Anne Rice
Used - Very Good
Paperback
Cornerstone
2009-11-05
256
0099522233
9780099522232
N/A
Book picture is for illustrative purposes only, actual binding, cover or edition may vary.
This is a used book - there is no escaping the fact it has been read by someone else and it will show signs of wear and previous use. Overall we expect it to be in very good condition, but if you are not entirely satisfied please get in touch with us.