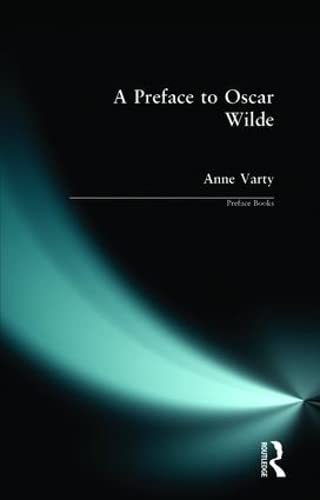 A Preface to Oscar Wilde
by Anne Varty

In Stock
£10.99
This work seeks to introduce the reader to the life and works of Oscar Wilde, focusing in particular on the period 1890 to 1895. Earlier works from the 1880s are represented to give a balanced view of the motivating forces in his work as a poet, lecturer, journalist, and a short story writer.
Very Good
Only 4 left

A Preface to Oscar Wilde Summary

A Preface to Oscar Wilde by Anne Varty

A Preface to Oscar Wilde provides a detailed study of the cultural, personal and political influences that shaped Wilde's writing. The study concentrates primarily on his fiction, critical dialogues and plays that were published between 1890 and 1895, and detailed accounts of Wilde's lesser known works such as his poetry, journalism and letters are also presented. The first section places his work in a variety of cultural contexts: Wilde's family life and his Irish inheritance are examined, the impact of his sexuality on his writing and reputation is considered, and a description is provided of how Wilde became a legendary figure in the arts. Major innovations and successes, such as The Picture of Dorian Gray, Salome and The Importance of Being Earnest are related to avant garde movements of their day such as aestheticism, decadence, and symbolism. Reference sections provide supporting material such as a Wilde chronology, a glossary of terms and a bibliography for further study.

Anne Varty sets out in this study to bring to life the work of Wilde, and to make his writing accessible to readers who are unfamiliar with his achievements. In so doing, she confronts the ethical drive of his work, and demonstrates the coherent evolution of his work from the aestheticism of the early poetry, through the sophisticated handling of theatre, to the dark self-scrutiny of autobiography.

The comprehensive and accessible approach makes this a useful reference work to all who are studying Oscar Wilde, both at A Level and undergraduate level. The content will also appeal to the general reader who is seeking to gain a greater understanding and appreciation of Wilde's work.

GOR004418668
A Preface to Oscar Wilde by Anne Varty
Anne Varty
Preface Books
Used - Very Good
Paperback
Taylor & Francis Ltd
1998-03-18
264
0582234824
9780582234826
N/A
Book picture is for illustrative purposes only, actual binding, cover or edition may vary.
This is a used book - there is no escaping the fact it has been read by someone else and it will show signs of wear and previous use. Overall we expect it to be in very good condition, but if you are not entirely satisfied please get in touch with us.