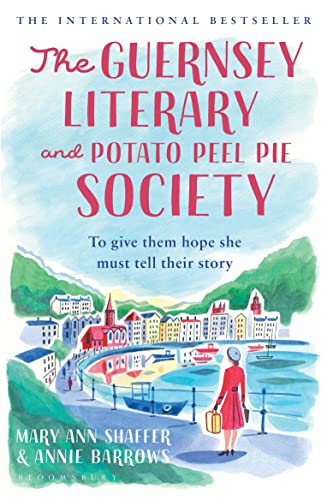 The beloved, life-affirming international bestseller which has sold over 5 million copies worldwide - now a major film starring Lily James, Matthew Goode, Jessica Brown Findlay, Tom Courtenay and Penelope Wilton To give them hope she must tell their story It's 1946. The war is over, and Juliet Ashton has writer's block. But when she receives a letter from Dawsey Adams of Guernsey - a total stranger living halfway across the Channel, who has come across her name written in a second hand book - she enters into a correspondence with him, and in time with all the members of the extraordinary Guernsey Literary and Potato Peel Pie Society. Through their letters, the society tell Juliet about life on the island, their love of books - and the long shadow cast by their time living under German occupation. Drawn into their irresistible world, Juliet sets sail for the island, changing her life forever.
Delightfully spirited ... You'd have to be pretty hard-hearted not to fall under its spell * Daily Mail *
Utterly delightful -- Helen Mirren
Atmospheric and touching ... it is about love and friendship and the ability of these qualities to survive adversity -- Alexander McCall Smith * The Times *
Thronging with lovable people * Guardian *
I can't remember the last time I discovered a novel as smart and delightful as this one ... Treat yourself to this book, please - I can't recommend it highly enough -- Elizabeth Gilbert, author of Eat Pray Love
What a gorgeous book - very touch and funny -- Joanna Lumley
Absolutely perfect and satisfying, and when you finish it you sit around wishing that you could find another book just like it -- Stephanie Meyer
Every now and again, a book comes along that is simple yet effective, readable yet memorable. This is one such delight ... It is a uniquely humane vision of inhumanity; one to lift even the most cynical of spirits * The Times *
Funny, moving and quite unlike anything I have read for a long time * Sunday Telegraph *
Shaffer's writing, with its self-deprecating humour and jaunty stylishness, is a heart-warmingly nostalgic journey into another age * Independent *
This heart-warming novel contrasts the grimness of occupied Guernsey with the humour and courage of the inhabitants * Daily Mail *
So comforting. A real satin coverlet of a book -- Rachel Cooke * New Statesman *
The society's members are quirky and lovable, their friendships touching and the letters so funny and moving that by the time she's considering a visit to the island we are desperate to go with her ... Warm and witty * Observer *
Thronging with lovable people ... The Guernsey Literary and Potato Peel Society commemorates beautiful spirits who pass through our midst and hunker undercover through brutal times. Shaffer's Guernsey characters step from the past radiant with eccentricity and kindly humour, a comic version of the state of grace ... Shaffer's writing, with its delicately offbeat, self-deprecating stylishness, is exquisitely turned * Guardian *
I absolutely adored it. The tone is so light and perfect that I fell in love with the characters just as she does. Heaven -- Esther Freud
Moving, authentic and funny -- Paul Torday, author of Salmon Fishing in the Yemen
A real delight * Woman & Home *
Moving ... A high feel-good factor * Metro *
Riveting in its inventiveness, charming in its delivery and, above all, human * Good Housekeeping *
Very moving * Marie Claire *
This warm-hearted tale of friendship, secrets and long correspondence is perfect rainy-day reading * Elle *
MARY ANN SHAFFER was born in 1934 in Martinsburg, West Virginia. She worked as an editor, a librarian and in bookshops. She became interested in Guernsey while visiting London in 1976. On a whim, she decided to fly to Guernsey but became stranded there as a heavy fog descended and no boats or planes were permitted to leave the island. As she waited for the fog to clear, she came across a book called Jersey Under the Jack-Boot, and so her fascination with the Channel Isles began. Many years later, when goaded by her own literary club to write a book, Mary Ann naturally thought of Guernsey. Mary Ann died in February 2008. She knew that this, her only novel, was to be published in thirteen countries. Before she died she wrote, 'I must tender special thanks to my niece, Annie, who stepped in to finish this book after unexpected health issues interrupted my ability to work shortly after the manuscript was sold. Without blinking an eye, she put down the book she was writing, pushed up her sleeves, and set to work on my manuscript. It was my great good luck to have a writer like her in the family, and this book could not have been done without her.' ANNIE BARROWS is the author the best-selling Ivy and Bean series for children, as well as The Magic Half and Magic in the Mix, and, most recently, a young adult novel entitled Nothing. Her second novel for adults, The Truth According to Us, was published in 2015. She lives with her family in Northern California.
GOR010008282
9781526610898
1526610892
The Guernsey Literary and Potato Peel Pie Society: rejacketed by Annie Barrows
Annie Barrows
Used - Very Good
Paperback
Bloomsbury Publishing PLC
2019-03-07
272
N/A
Book picture is for illustrative purposes only, actual binding, cover or edition may vary.
This is a used book - there is no escaping the fact it has been read by someone else and it will show signs of wear and previous use. Overall we expect it to be in very good condition, but if you are not entirely satisfied please get in touch with us
Trustpilot