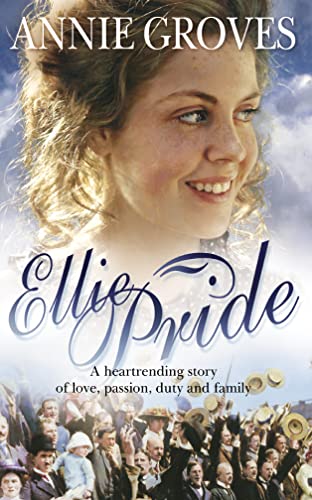 A stunning saga debut from an author destined to be a star of the genre - ELLIE PRIDE is an engrossing, heartrending story of love, passion, duty and family, set in the North-west in the early part of the twentieth century.

A stunning saga debut from an author destined to be a star of the genre - ELLIE PRIDE is an engrossing, heartrending story of love, passion, duty and family, set in the North-west in the early part of the twentieth century.

A stirring, heartrending story of love, passion, duty and family, set in the early years of the 1900s as the First World War looms.

After the tragic death of her mother, beautiful, headstrong Ellie Pride must forge her own way in the world. Having made a deathbed promise to her mother to forsake passion for stability and social status, Ellie rejects the advances of local craftsman Gideon Walker, despite her deep attraction to him. With her grieving father struggling to cope, Ellie is exiled to live with her aunt and uncle. Her mother hoped Ellie would be able to escape her humble roots forever. But despite the so-called luxury, Ellie is left frightened and alone.

Her uncle quickly reveals a terrifying cruelty that forces her into a loveless marriage in order to escape him. Struggling to support her weak husband against his penny-pinching father, Ellie never forgets her love for Gideon. Their paths are destined to cross again and again.

But when events take a tragic turn, Ellie needs all her pride and strength to overcome hardship, and to triumph.

`A stirring and heartrending family saga...Against a backdrop of change when the suffragette movement was coming to the fore, the choices and dreams of a generation of women combine to create this passionate story.' Liverpool Daily Post

GOR001111901
Ellie Pride by Annie Groves
Annie Groves
Used - Very Good
Paperback
HarperCollins Publishers
2003-09-01
608
0007149557
9780007149551
N/A
Book picture is for illustrative purposes only, actual binding, cover or edition may vary.
This is a used book - there is no escaping the fact it has been read by someone else and it will show signs of wear and previous use. Overall we expect it to be in very good condition, but if you are not entirely satisfied please get in touch with us.