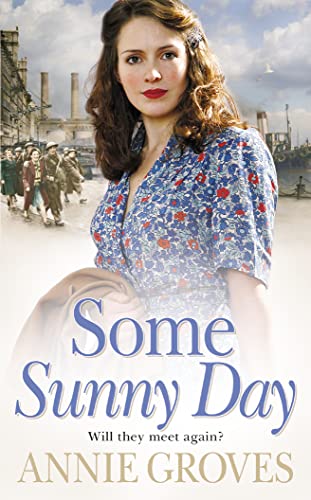 Some Sunny Day
by Annie Groves

Forbidden love and family secrets In World War Two Liverpool in the heartrending new saga from the author of Goodnight Sweetheart.

Some Sunny Day by Annie Groves

Forbidden love and family secrets In World War Two Liverpool in the heartrending new saga from the author of Goodnight Sweetheart.

Rosie has grown up in the heart of Liverpool's Italian community, treated as one of their own. With a father away at sea and a mother more interested in other men than her only daughter, the bighearted Grenellis are the closest thing Rosie has to a proper family.

But when war breaks out, and Italy becomes the Allies' adversary, everything changes. The community is torn in two: friends become enemies, neighbours become traitors and Rosie is left uncertain of just who she can trust.

As war intensifies, and Liverpool is subjected to relentless bombings, things become more perilous. When a devastating attack leaves her mother dead, Rosie is sent to live with her aunt in Edge Hill. Her father is feared missing at sea and her aunt lets slip a family secret which has unimaginable consequences...

Fleeing her cruel aunt, Rosie becomes a Land Girl and falls in love - with someone utterly forbidden. As bombs drop and families are ripped apart by conflict at home and abroad, can they find happiness or will war stand in their way?

`A stirring and heartrending family saga...Against a backdrop of change when the suffragette movement was coming to the fore, the choices and dreams of a generation of women combine to create this passionate story.' Liverpool Daily Post

`This novel [Some Sunny Day] adds to Annie Groves' growing reputation as a storyteller...This is an absorbing story, with a delightful heroine' Historical Novels Review

GOR000692394
Some Sunny Day by Annie Groves
Annie Groves
Used - Very Good
Paperback
HarperCollins Publishers
2007-02-19
592
0007209657
9780007209651
N/A
Book picture is for illustrative purposes only, actual binding, cover or edition may vary.
This is a used book - there is no escaping the fact it has been read by someone else and it will show signs of wear and previous use. Overall we expect it to be in very good condition, but if you are not entirely satisfied please get in touch with us.