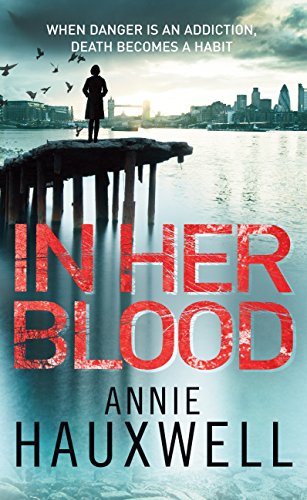 In Her Blood
by Annie Hauxwell

In Stock
£5.99
The first in a series of crime novels starring the magnificent Catherine Berlin, a civilian investigator whose long-standing heroin addiction is only part of her story.
Very Good Good Well Read
Only 1 left

In Her Blood Summary

In Her Blood by Annie Hauxwell

The first in a series of crime novels starring the magnificent Catherine Berlin, a civilian investigator whose long-standing heroin addiction is only part of her story. On a bone-chilling February morning, Catherine Berlin, investigator with the Financial Services Agency, finds the almost-headless body of her informant, 'Juliet Bravo', rolling in a shallow reach of the Thames. That Juliet Bravo's death is linked to an investigation of local loan shark Archie Doyle is no surprise to Berlin, but when Berlin's own unorthodox methods are blamed for the murder, she realises bigger predators are circling. To start with, it looks as though Berlin will pay only with her job. And then, on a routine trip to her GP (one of a dying breed who will still prescribe heroin to long-term addicts), she stumbles across a second body. Suspended, incriminated, and then blackmailed into cooperation by the detective leading the murder investigation, Catherine Berlin has seven stolen days of clarity in which to solve the crime - and find a new supplier.

In Her Blood Reviews

"This is powerful and uncompromising fare from an intriguing writer." * The Good Book Guide *
"Berlin is both tough and fragile but far from stereotypical...Her closest relative in modern fiction is the alcoholic DCI Jane Tennison in Prime Suspect. Catch the wave now, while it's building." * Times *
"With meticulous detail and great character depth, In Her Blood is an assured start to Hauxwell's career as a novelist." -- Ellie de Rose * Irish Examiner *
"A stylishly written and assuredly paced debut that heralds a promising new series." -- David Evans * The Financial Times *
"The writing is sharp and suspenseful, the plot engaging, the characters enthralling. I'm hooked on Annie Hauxwell and hanging out for my next fix." -- Angela Savage * Radio National Books & Arts Daily *

Annie Hauxwell was born in London. She abandoned the law to work as an investigator and now combines this with writing. She lives in a small country town in Australia when not in London. Her career includes prize winning short crime fiction and professionally produced theatre and film, and her feature screenplays have been optioned in the U.S. and Australia. Her working life has also included stints as a psychiatric nurse, cleaner, sociologist and taxi driver. In Her Blood is her first book.

GOR004723796
In Her Blood by Annie Hauxwell
Annie Hauxwell
Catherine Berlin
Used - Very Good
Paperback
Cornerstone
2012-05-24
272
0434021806
9780434021802
N/A
Book picture is for illustrative purposes only, actual binding, cover or edition may vary.
This is a used book - there is no escaping the fact it has been read by someone else and it will show signs of wear and previous use. Overall we expect it to be in very good condition, but if you are not entirely satisfied please get in touch with us.