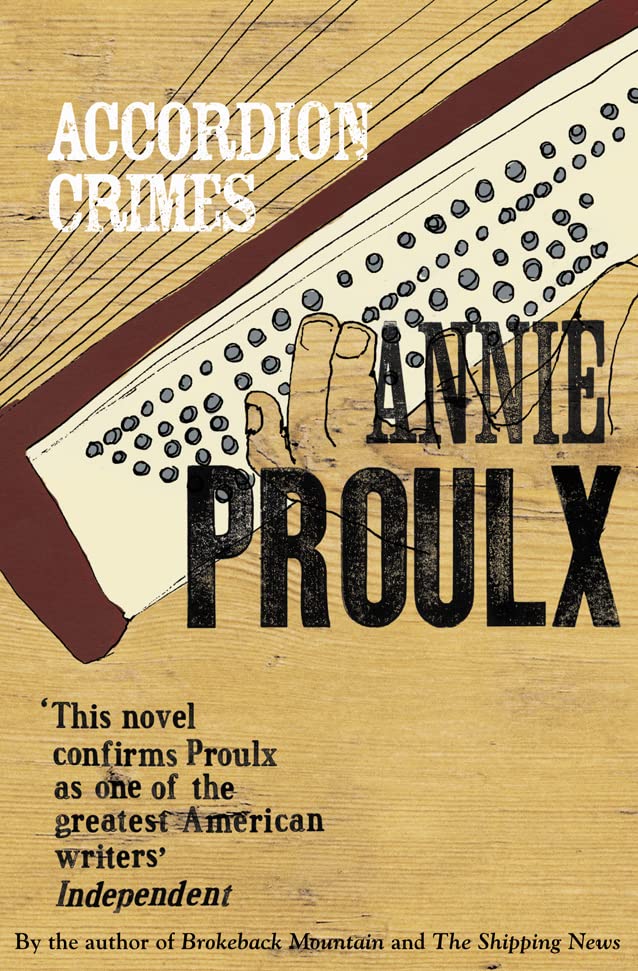 The third novel from the Pulitzer Prize-winning author of `The Shipping News', `Accordion Crimes' spans generations, continents and a century and confirms the hallucinatory power of Proulx's writing.

The third novel from the Pulitzer Prize-winning author of `The Shipping News', `Accordion Crimes' spans generations, continents and a century and confirms the hallucinatory power of Proulx's writing.

`Accordion Crimes' is a masterpiece of story-telling that spans a century and a continent. It opens in 1890 in Sicily, when an accordion-maker and his son, carrying little more than his finest button accordion, begin their voyage to the teeming, violent port of New Orleans. Within a year, the accordion-maker is murdered by an anti-Italian lynch mob, but his instrument carries the novel into another community of immigrants: German-Americans founding a new town in South Dakota. Moving from South Dakota to Texas, from Montana to Maine, the nine instantly compelling and intricately connected sections of the novel illuminate the lives of the founders of a nation, descendants of Mexicans, Poles, Germans, Irish, Scots and Franco-Canadians. Through the music of the accordion they express their fantasies, sorrows and exuberance.

`This novel confirms Proulx as one of the greatest American writers.' Independent

`The detail is breathtaking, her ear for dialogue matchless, her observation unsentimental, her pace infectious. She tackles death, sex and the gruesome with black hilarity and the skills of a born storyteller. Rich and dense, "Accordion Crimes" is a splendid novel.' The Times

`Annie Proulx has written an epic social history of America and the plight of the immigrant, which is astonishing in its breadth, heroic in the scale of its ambition and brilliant in its manner of realising them.' Daily Mail

`The glorious richness of the language continually makes you pause in wonder, the details pile up and surround you.' Scotsman

`Her range and scope are tremendous, shuttling through the warp of multiple cultures and spanning, by the end, a hundred years. And it is the range of detail that grips, richly concrete.' Spectator

`Vigorous, salty and extraordinary.' The Times

Annie Proulx published her first novel `Postcards' in 1991 at the age of 56. `The Shipping News' won the Pulitzer Prize for Fiction, the National Book Award and the Irish Times International Prize. Her third novel, `Accordion Crimes', was published in 1996. She is also the author of three short-story collections, `Heart Songs' (1994), `Close Range' (1999) and `Bad Dirt' (2004). `Brokeback Mountain' was made into an Oscar-winning film in 2005. `Fine Just the Way It Is', her third collection of Wyoming short stories, was published in 2008.

GOR000409838
Accordion Crimes by Annie Proulx
Annie Proulx
Used - Very Good
Paperback
HarperCollins Publishers
1997-06-05
544
185702575X
9781857025750
N/A
Book picture is for illustrative purposes only, actual binding, cover or edition may vary.
This is a used book - there is no escaping the fact it has been read by someone else and it will show signs of wear and previous use. Overall we expect it to be in very good condition, but if you are not entirely satisfied please get in touch with us.