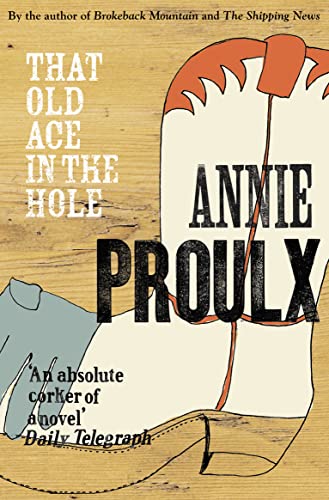 That Old Ace in the Hole
by Annie Proulx

A brilliant novel from Pulitzer Prize-winning Annie Proulx, author of `The Shipping News' and `Brokeback Mountain'.

That Old Ace in the Hole Summary

That Old Ace in the Hole by Annie Proulx

A brilliant novel from Pulitzer Prize-winning Annie Proulx, author of `The Shipping News' and `Brokeback Mountain'.

`That Old Ace in the Hole' is a richly textured story of one man's struggle to make good in the inhospitable ranch country of the Texas panhandle, told with razor-sharp wit and a masterly sense of place.

Some folks in the Texas panhandle do not like hog farms. But Bob Dollar, the newly hired hog site scout for Global Pork Rind, intends to do his job. Bob must contend with tough men and women like ancient Freda Beautyrooms, who controls a ranch he covets, and Ace Crouch, the windmiller who defies the hog farms. As Bob settles in at La Von Fronk's bunkhouse and lends a hand at Cy Frease's Old Dog Cafe, he is forced to question everything.

That Old Ace in the Hole Reviews

`Sometimes the laughs are prompted by joyously well-jointed plot devices, or by Proulx's small, absurd observations. As often as not, the humour comes from the unmistakable edginess and quirkiness of Proulx's prose. It is hard to think of any living writer who deserves to be mentioned in the same breath as Dickens, with the exception of Proulx.'
A N Wilson, New Statesman

`Proulx's own ace in the hole is her brilliance at evoking place and landscape. She sets about drawing the vast distances and parched flatlands of Texas with almost immeasurable skill.' Alex Clark, Guardian

`The travels and travails of Bob Dollar, and his habit of asking garrlous locals to tell stories about the old days, allow her to build up a rich and many-layered portrait of the region. The reader gets to pluck the fruits of all that research and through the magic of her prose become engrossed in subjects like windmill repairs and the history of barbed wire.' Richard Grant, Telegraph Magazine

Annie Proulx published her first novel `Postcards' in 1991 at the age of 56. `The Shipping News' won the Pulitzer Prize for Fiction, the National Book Award and the Irish Times International Prize. Her third novel, `Accordion Crimes', was published in 1996. She is also the author of three short-story collections, `Heart Songs' (1994), `Close Range' (1999) and `Bad Dirt' (2004). `Brokeback Mountain' was made into an Oscar-winning film in 2005. `Fine Just the Way It Is', her third collection of Wyoming short stories, is published in 2008.

GOR000385685
That Old Ace in the Hole by Annie Proulx
Annie Proulx
Used - Very Good
Paperback
HarperCollins Publishers
2004-03-22
384
0007151527
9780007151523
N/A
Book picture is for illustrative purposes only, actual binding, cover or edition may vary.
This is a used book - there is no escaping the fact it has been read by someone else and it will show signs of wear and previous use. Overall we expect it to be in very good condition, but if you are not entirely satisfied please get in touch with us.