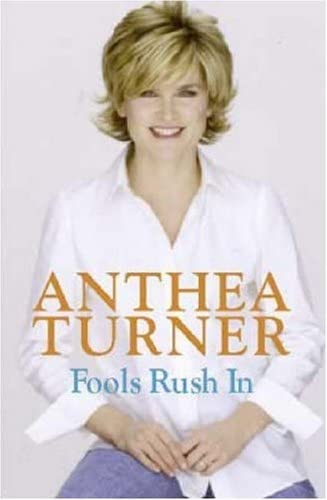 Fools Rush In
by Anthea Turner

In Stock
£5.99
* Candid, emotive and inspiring autobiography of Anthea Turner, one of the most popular presenters on UK television.
Very Good Good
5 in stock

Fools Rush In by Anthea Turner

For the last ten years Anthea Turner has probably been the most popular presenter on TV. She has also been the constant target of extraordinary media attention, regularly on the front pages of national newspapers. In FOOLS RUSH IN Anthea presents herself as her fans have never seen before. It is a forthright, emotive & inspiring account of the life of a great survivor tinged with tragedy. It's the story of what it's really like to live on 'Planet Fame' & the price its inhabitants often have to pay, & a compelling insider's account of:
*Working at Radio 1 and her fraught relationship with DJ Bruno Brookes.
*Presenting the BBC's 'Top of the Pops', the first female non-Radio 1 DJ to do so.
*'doing the settee' on GMTV breakfast television (and working with Eamonn Holmes).
*Presenting the 'National Lottery Live' on BBC on Saturdays to millions.
* And, last but not least, 'Blue Peter'. FOOLS RUSH IN describes Anthea's marriage to Peter Powell, its painful break-up when she found herself in love with Grant Bovey & its consequences, and where one of TV's most luminous personalities goes from here.

So honest that the book is a compelling read. * WOMAN'S WAY *
The celebrity memoir is a dangerous beast, and Fools Rush In by television personality Anthea Turner certainly knows how to bare its teeth. Cleverly ghost-written by romance writer Wendy Holden, the pace here is fast and breathless, and pages turn fast; * ultimate betrayal. Even ex-husband Peter Powell's tendency to be "emotionally distant--we didn't share a marital bed"-- is laid bare (remarkable considering Peter Powell is still Turner's manager and therefore sanctioned the book)--this story is filled wi *
Turner's truthfulness--at least, the truth as seen through her own, Peter-Pan eyes--seems unquestionable, and while this latest contender for the Turner Prize for Publicity leaves ex-lovers shivering naked in the spotlight, Anthea perhaps tells us more about herself than she intends by dropping in priceless quotes. "I was at the very peak of my career, rivalled only, according to one paper, as the blonde most little girls wanted to be" she lisps blithely, before informing us "I'm a big Michael Flatley fan". More telling are her recurrent references to money, from "Pete and I divorced for #127.50" to "It has cost Grant and I over 1 million pounds to be together"; but most dangerous of all are her over-earnest justifications as she faced trial by her public. Surely it is the relationship with her young stepdaughters, who she clumsily mentions and should have left well alone, which needs work. Anthea Turner hoped to set the record straight with this autobiography. Instead with Fools Rush In--hugely entertaining for all the wrong reasons--she may have made things worse. There was once a time when it looked like chocolate wouldn't melt in the mouth of TV's golden girl, now it seems a certain Cadbury s' snowflake bar--as shown ill-advisedly in a wedding publicity snap--has melted her perfect image. * Eilidh McLean, AMAZON.CO.UK REVIEW *

Born in 1960 in Staffordshire, Anthea's broadcasting career stared at BBC Radio Stoke. Presenting the National Lottery made her a household name in Britain.

GOR000379829
Fools Rush In by Anthea Turner
Anthea Turner
Used - Very Good
Paperback
Little, Brown & Company
2000-10-16
288
0316854999
9780316854993
N/A
Book picture is for illustrative purposes only, actual binding, cover or edition may vary.
This is a used book - there is no escaping the fact it has been read by someone else and it will show signs of wear and previous use. Overall we expect it to be in very good condition, but if you are not entirely satisfied please get in touch with us.