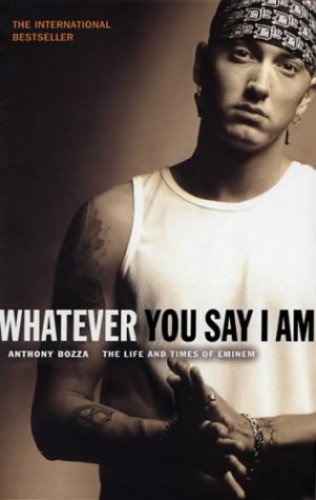 Whatever You Say I Am
by Anthony Bozza

In Stock
£3.99
Eminem is currently the world's biggest and most controversial music star. Most crucially, Anthony Bozza's unprecedented access to Eminem himself makes him uniquely qualified to answer the big question - why does Eminem matter?
Very Good
20 in stock

Whatever You Say I Am Summary

Whatever You Say I Am: The Life And Times Of Eminem by Anthony Bozza

Eminem is currently the world's biggest and most controversial music star. He has been blasted for what many of his critics regard as overtly homophobic and misogynistic lyrics, and resented both for his record-breaking commercial success and being a white man in a black genre. But Eminem's sheer talent has transcended such condemnation and established him as the most important figure to come out of popular music since Kurt Cobain. Whatever You Say I Am - based on exclusive interviews with members of Eminem's family, key figures in the music business, sociologists and reviewers and featuring previously unpublished photographs - is the first book to reveal the man behind the controversy. Most crucially, Anthony Bozza's unprecedented access to Eminem himself makes him uniquely qualified to answer the big question - why does Eminem matter? The answer is found in Eminem's unlikely life story, in his extraordinary ascent to super-stardom and in an analysis of his music and lyrics. Whatever You Say I Am will keep Eminem's legions of fans riveted, and will enlighten his critics.

Whatever You Say I Am Reviews

"A thorough and overdue appraisal" * Guardian *
"Bozza works at the why and how of the story, discussing the origins and development of hip-hop culture, examining Detroit's place in American music history and looking at race and ethnicity in the US before getting back to Eminem's lyrics and what he 'means'" * Independent *
"The most dangerous threat to American children since polio" -- George Bush
"He has created a sense of what is possible. He has sent a voltage around a generation" -- Seamus Heaney
"Delivered with pace ...The most exhaustive trawl through the things that matter most about the most dominant artist of the age" * Q Magazine *

Anthony Bozza is a very well respected former Rolling Stone journalist, who wrote the first big profile of Eminem in the USA and has worked with him repeatedly since.

GOR000552506
Whatever You Say I Am: The Life And Times Of Eminem by Anthony Bozza
Anthony Bozza
Used - Very Good
Paperback
Transworld Publishers Ltd
2004-07-05
368
0552150959
9780552150958
N/A
Book picture is for illustrative purposes only, actual binding, cover or edition may vary.
This is a used book - there is no escaping the fact it has been read by someone else and it will show signs of wear and previous use. Overall we expect it to be in very good condition, but if you are not entirely satisfied please get in touch with us.