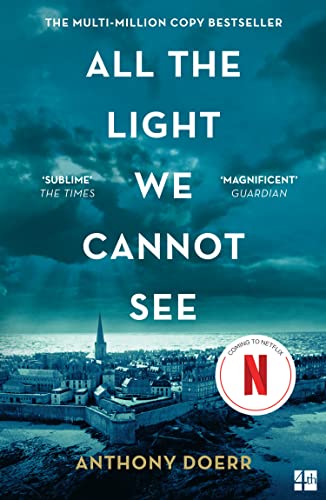 All the Light We Cannot See
by Anthony Doerr

In Stock
£4.49
WINNER OF THE 2015 PULITZER PRIZE FOR FICTION NATIONAL BOOK AWARD FINALIST NEW YORK TIMES BESTSELLER WINNER OF THE CARNEGIE MEDAL FOR FICTION A beautiful, stunningly ambitious novel about a blind French girl and a German boy whose paths collide in occupied France as both try to survive the devastation of World War II
Very Good Good Well Read
45 in stock

All the Light We Cannot See Summary

All the Light We Cannot See by Anthony Doerr

A beautiful, stunningly ambitious novel about a blind French girl and a German boy whose paths collide in occupied France as both try to survive the devastation of World War II

`Open your eyes and see what you can with them before they close forever.'

For Marie-Laure, blind since the age of six, the world is full of mazes. The miniature of a Paris neighbourhood, made by her father to teach her the way home. The microscopic layers within the invaluable diamond that her father guards in the Museum of Natural History. The walled city by the sea, where father and daughter take refuge when the Nazis invade Paris. And a future which draws her ever closer to Werner, a German orphan, destined to labour in the mines until a broken radio fills his life with possibility and brings him to the notice of the Hitler Youth.

In this magnificent, deeply moving novel, the stories of
Marie-Laure and Werner illuminate the ways, against all odds, people try to be good to one another.

All the Light We Cannot See Reviews

'Far more than a conventional war story, It's a tightly focused epic ... Doerr paints with a rich palette, using prose that resonates deeply and conveys the ephemera of daily existence along with high drama, sadness and hope ... A bittersweet and moving novel that lingers in the mind' Daily Mail

`An epic work about bravery and the power of attachment' Rose Tremain, Observer, Books of the Year

`An epic and a masterpiece' Justin Cartwright, Observer

`This novel will be a piece of luck for anyone with a long plane journey or beach holiday ahead. It is such a page-turner, entirely absorbing... magnificent' Guardian

`Doerr can bring a scene to life in a single paragraph ... Delicate and moving ... the novel takes hold and will not easily let go' The Times

`Boy meets girl in Anthony Doerr's hauntingly beautiful new book, but the circumstances are as elegantly circuitous as they can be' The New York Times

`I'm not sure I will read a better novel this year ... Enthrallingly told, beautifully written and so emotionally plangent that some passages bring tears' Washington Post

`This jewel of a story is put together like a vintage timepiece ... Doerr's writing and imagery are stunning. It's been a while since a novel had me under its spell in this fashion.' Abraham Verghese

`A dazzling, epic work of fiction. Anthony Doerr writes beautifully about the mythic and the intimate, about snails on beaches and armies on the move, about fate and love and history and those breathless, unbearable moments when they all come crashing together.' Jess Walter

Anthony Doerr is the author of four books, The Shell Collector, About Grace, Four Seasons in Rome and Memory Wall. Doerr's short fiction has won three O. Henry Prizes and has been anthologized in The Best American Short Stories, The Anchor Book of New American Short Stories, and The Scribner Anthology of Contemporary Fiction. He has won the Rome Prize, and shared the New York Public Library's Young Lions Fiction Award with Jonathan Safran Foer. In 2007 Granta placed Doerr on its list of the "21 Best Young American novelists." Doerr lives in Boise, Idaho, with his wife and two sons.

GOR006716026
All the Light We Cannot See by Anthony Doerr
Anthony Doerr
Used - Good
Paperback
HarperCollins Publishers
2015-04-23
544
0008138303
9780008138301
N/A
Book picture is for illustrative purposes only, actual binding, cover or edition may vary.
This is a used book - there is no escaping the fact it has been read by someone else and it will show signs of wear and previous use. Overall we expect it to be in very good condition, but if you are not entirely satisfied please get in touch with us.