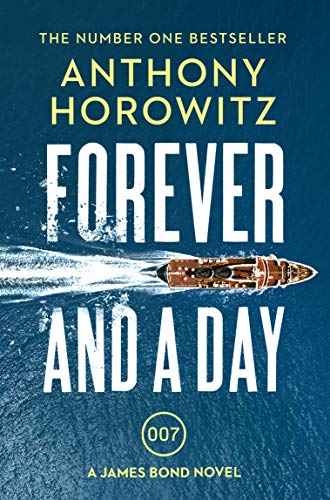 Forever and a Day
by Anthony Horowitz

Forever and a Day Summary

Forever and a Day by Anthony Horowitz

*THE NO.1 SUNDAY TIMES BESTSELLER* A spy is dead. A legend is born. Read the explosive new James Bond thriller. ***** A British agent floats in the waters of the French Riviera, murdered by an unknown hand. Determined to uncover the truth, James Bond enters a world of fast cars, grand casinos and luxury yachts. But beneath the glamour, he soon encounters a dangerous network of organised crime. It's time for Bond to earn his licence to kill. He must find those responsible and unravel their devastating plan - before he becomes their next victim... The exhilarating prequel to Casino Royale ***** `Exciting... 007 is back' Daily Express `Evil villains, fast cars...and the story rips along' Guardian `Tremendous fun... A first-class action writer' Sunday Express `Horowitz excels at action sequences' Sunday Times

Forever and a Day Reviews

"The super spy is back, with a fresh injection from novelist and screenwriter extraordinaire, Anthony Horowitz. The expert in suspense takes us back to the beginning of James Bond's story... the story rips along with plenty of familiar Bond staples: evil villains, fast cars and women falling for young Bond's charms. Ian Fleming would be proud." * Guardian *
"Horowitz is a worthy successor to Ian Fleming, putting 007 back in his true domain... This New Bond is up there with the better Old Bonds... The denouement is a very fine piece of action writing... Horowitz has done splendidly." * Scotsman *
"Straight away Horowitz is able to capture Fleming's flowing style and intricate details from how Bond likes his eggs in the morning to the cars he drives... He's just as faithfully suave as in the original novels." * Daily Express *
"A novel that feels very like a film... fast-paced, skilfully written... leaves you wanting more, and for serious Bond junkies [it] is the next fix in a long tale of addiction." * The Times *
"Even better than Trigger Mortis... it is tremendous fun. Anthony Horowitz has the discipline and skill of a first-class action writer." * Sunday Express *

Anthony Horowitz is one of the most prolific and successful writers working in the UK. He has written over 40 books including the bestselling teen spy `Alex Rider' series, which is estimated to have sold 19 million copies worldwide. Anthony is also an acclaimed writer for adults. He was commissioned by the Conan Doyle Estate to write two new Sherlock Holmes novels; The House of Silk was published in November 2011 and was internationally lauded as the top title of the autumn. The sequel, Moriarty, was published in October 2014 with similar success. The Ian Fleming Estate then asked him to write a continuation James Bond novel,Trigger Mortis, and in 2016 he became the first writer to be invited to produce a second, with a release scheduled for May 2018. His standalone novel, Magpie Murders, was released in October 2016 to critical acclaim and 2017 saw the release ofThe Word is Murder, the first in a series of detective novels. Anthony is also responsible for creating and writing some of the UK's most beloved and successful television series, including Midsomer Murders and Foyle's War. In 2014, he was awarded an OBE for his services to literature.

GOR009742312
Forever and a Day by Anthony Horowitz
Anthony Horowitz
James Bond 007
Used - Very Good
Paperback
Vintage Publishing
2019-04-04
304
1784706388
9781784706388
N/A
Book picture is for illustrative purposes only, actual binding, cover or edition may vary.
This is a used book - there is no escaping the fact it has been read by someone else and it will show signs of wear and previous use. Overall we expect it to be in very good condition, but if you are not entirely satisfied please get in touch with us.