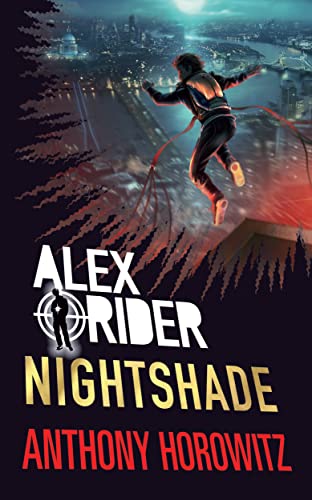 Get ready for action, adrenaline and adventure in this explosive, brand new Alex Rider mission by bestselling author, Anthony Horowitz.
In this adrenaline-fuelled adventure in the number one bestselling series, Alex Rider is sent by MI6 Special Operations to infiltrate a new and sinister organization known only as Nightshade. Alex is on his own, with the fate of thousands of people resting in his hands.

As ever, the plotting is meticulous and the pace relentless, but what is new is Alex's dawning compassion for other children. * New Statesman *
Pacy and ingenious, as usual, this novel demonstrates a high level of philosophical complexity as it considers the nature of cults, religious extremism and our responsibility for each other, as well as involving karate, explosions and jumping out of planes. -- Nicolette Jones * The Sunday Times & The Sunday Times Ireland *
Anthony Horowitz is second to none at writing pageturners that children are desperate to read. Now he's back with Nightshade, his 12th gripping adventure about teenage superspy Alex Rider. -- Emma Lee Potter * Sunday Express (S Magazine) *
Fizzling with suspense, Nightshade is fast paced and thrilling - a delight for newcomers and old fans alike. It's difficult to keep up the momentum in a series that began two decades ago, but once again Horowitz proves he is a master of his craft. Hopefully, this is not the last we shall see of teen hero Alex Rider. -- Megan Baynes * Belfast Telegraph *
It's a chunky book and all the better for it. Filled with the usual pulse-quickening adventures from the teen super-spy, expect your young readers to disappear inside it's pages entirely. Great. * Angels & Urchins *

Anthony Horowitz is the author of the number one bestselling Alex Rider books and The Power of Five series. He has enjoyed huge success as a writer for both children and adults, most recently with the latest adventure in the Alex Rider series, Secret Weapon and the highly acclaimed Sherlock Holmes novel, The House of Silk. His latest novel, Moriarty, is also set in the world of Sherlock Holmes. Anthony was chosen by the Ian Fleming estate to write the new James Bond novel, Trigger Mortis which was published in 2015. Anthony has won numerous awards, including the Bookseller Association/Nielsen Author of the Year Award, the Children's Book of the Year Award at the British Book Awards, and the Red House Children's Book Award. In 2014 Anthony was awarded an OBE for Services to Literature. He has also created and written many major television series, including Injustice, Collision and the award-winning Foyle's War.

GOR010516634
Nightshade by Anthony Horowitz
Anthony Horowitz
Used - Like New
Hardback
Walker Books Ltd
2020-04-02
448
1406389293
9781406389296
N/A
Book picture is for illustrative purposes only, actual binding, cover or edition may vary.
This is a used book - there is no escaping the fact it has been read by someone else and it will show signs of wear and previous use. Overall we expect it to be in very good condition, but if you are not entirely satisfied please get in touch with us.