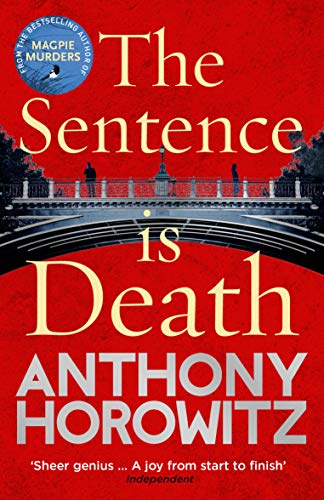 The Sentence is Death
by Anthony Horowitz

Used Price
£2.69
New RRP £8.99
Free Shipping in the UK
Passion, deception, an unexplained death and a detective with quite a lot to hide lie at the heart of Anthony Horowitz's brilliant new murder mystery, the second in the bestselling series starring Private Investigator Daniel Hawthorne.
Very Good Good Well Read

The Sentence is Death Summary

The Sentence is Death: A mind-bending murder mystery from the bestselling author of THE WORD IS MURDER by Anthony Horowitz

`My favourite literary hero at the moment is Anthony Horowitz' - SHARI LAPENA, author of The Couple Next Door and A Stranger in the House _________________________ Death, deception, and a detective with quite a lot to hide: the second novel in the bestselling series starring Private Investigator Daniel Hawthorne. _________________________ `You shouldn't be here. It's too late...' These were Richard Pryce's last words, overheard moments before the celeb divorce lawyer was bludgeoned to death with a GBP3,000 bottle of wine. Strange circumstances pile up. Pryce was teetotal, so why this bottle? Why those words? Why did the killer paint a number on his wall? And, most importantly, which of the man's many, many enemies did the deed? Baffled, the police are forced to bring in Private Investigator Daniel Hawthorne and his sidekick, the author Anthony, who's really getting rather good at this murder investigation business. But as Hawthorne takes on the case with characteristic relish, it becomes clear that he, too, has secrets to hide. Anthony knows they must be exposed - even at the risk of death... _________________________ `It's great fun and often hilarious to watch Anthony, as Hawthorne's biographer try to solve crimes while hopelessly out of his depth. This is meta-fiction I can get behind.' - SHARI LAPENA "Anthony Horowitz gets away with murder in all sorts of ways and emerges triumphant...but never mind the details; count the laughs" Marcel Berlins "Anthony Horowitz gets away with murder in all sorts of ways and emerges triumphant" - THE TIMES, Books of the Year "Pure pleasure for readers ... A must-read delight." - WALL STREET JOURNAL "This is crime fiction as dazzling entertainment, sustained by writing as skilfully light-footed as Fred Astaire" - SUNDAY TIMES CRIME CLUB (STAR PICK) "A crime story that keeps you up into the small hours... a page-turning mystery" - METRO "Sheer genius ... The narrative is hilarious and full of Holmesian clues and deliberate errors which will leave the eagle-eyed reader feeling just a bit smug. A joy from start to finish" - INDEPENDENT "Fans of traditional puzzle mysteries will be enthralled" - PUBLISHERS WEEKLY "One of the most creative writers in the country today" - JEREMY VINE "Huge fun... It's hard to know why anyone who loves a good mystery wouldn't thoroughly enjoy the ride" - IRISH INDEPENDENT "A new Anthony Horowitz novel is always something to look forward to. Anyone who likes a good Midsomer-style murder mystery will love The Sentence is Death" - CULTUREFLY 'Succeeds on all levels ... Horowitz has the Midas touch' - BOOKLIST 'This mystery is a worthy and witty follow-up to last year's best-seller The Word Is Murder ... brilliant and enigmatic' - AARP 'No one currently working the field has anywhere near this much ingenuity to burn' - KIRKUS

The Sentence is Death Reviews

"Anthony Horowitz gets away with murder in all sorts of ways and emerges triumphant...but never mind the details; count the laughs" * Marcel Berlins *
"This is crime fiction as dazzling entertainment, sustained by writing as skilfully light-footed as Fred Astaire" * Sunday Times Crime Club, Star Pick *
"A crime story that keeps you up into the small hours... a page-turning mystery" * Metro *
"With its teasing mix of real and fictional characters, Horowitz's fast-paced novel remains tantalising to the final page" * Daily Mail *
"Clever" * Good Housekeeping *

ANTHONY HOROWITZ is the author of the bestselling teen spy series, Alex Rider, and is also responsible for creating and writing some of the UK's most loved and successful TV series, including Midsomer Murders and Foyle's War. He has also written two highly acclaimed Sherlock Holmes novels, The House of Silk and Moriarty; Two James Bond novels, Trigger Mortis and Forever and a Day; His previous thrillers Magpie Murders and The Word is Murder were both Top Ten Sunday Times bestsellers. He is on the board of the Old Vic Theatre, and was awarded an OBE for his services to literature in January 2014. The Sentence is Death is the second in a series of crime novels starring Detective Daniel Hawthorne.

GOR010080689
The Sentence is Death: A mind-bending murder mystery from the bestselling author of THE WORD IS MURDER by Anthony Horowitz
Anthony Horowitz
Used - Very Good
Paperback
Cornerstone
2019-09-24
400
1784757535
9781784757533
N/A
Book picture is for illustrative purposes only, actual binding, cover or edition may vary.
This is a used book - there is no escaping the fact it has been read by someone else and it will show signs of wear and previous use. Overall we expect it to be in very good condition, but if you are not entirely satisfied please get in touch with us.