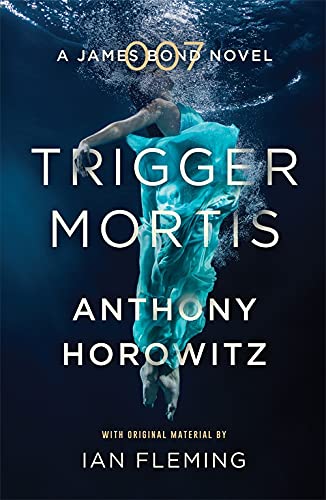 It's 1957 and James Bond (agent 007) has only just survived his showdown with Auric Goldfinger at Fort Knox. By his side is Pussy Galore, who was with him at the end. Unknown to either of them, the USSR and the West are in a deadly struggle for technological superiority. And SMERSH is back.

The Soviet counter-intelligence agency plans to sabotage a Grand Prix race at the most dangerous track in Europe. But it's Bond who finds himself in the driving seat and events take an unexpected turn when he observes a suspicious meeting between SMERSH's driver and a sinister Korean millionaire, Jai Seong Sin.
Soon Bond is pitched into an entirely different race uncovering a plan that could bring the West to its knees.

This is James Bond as Fleming imagined him.

A humdinger of a Bond story, so cunningly crafted and thrillingly placed that OO7's creator would have been happy to own it.... The book is the best Bond movie you'll ever see without actually having to see the movie. -- Simon Schama * FINANCIAL TIMES *
TRIGGER MORTIS is a blast. Set two weeks after the end of the novel Goldfinger in 1957, it has a superb plot based around the early space race and features the return of the best Bond girl of them all, Pussy Galore. * MAIL ON SUNDAY *
Fleming fans certainly won't be disappointed. Trigger Mortis contains all the adrenaline you'd expect from a Bond novel with bags of humour, international jet-setting and a compelling cast of inventively named characters. It is, one suspects, a novel Fleming would be proud to have in the 007 canon. * SUNDAY EXPRESS *
Almost too good * EVENING STANDARD *
Horowitz is doing something both clever and audacious...a clever and enjoyable pastiche, which manages to press many of the buttons that were the purview of 007's creator. * INDEPENDENT *
There is a delicate line separating imitation from parody and Horowitz stays on the right side of it to perfection. * DAILY EXPRESS *
'Sexy, slick and full of suspense, this new Bond novel is perfect escapism.' * GRAZIA *
Anthony Horowitz knows exactly what ingredients are required to satisfy even the most gluttonous James Bond fan and serves them up with the confidence of the self-confessed aficionado that he is... In Trigger Mortis the reader finds set pieces expertly handled and genuinely exciting... it all makes for an energetic and satisfying read. * INDEPENDENT ON SUNDAY *
'This supremely well-crafted thriller is an expertly shaken martini of authentic flavours, right down to several heart-pounding set pieces that surely belong on the big screen. Women... are in the driving seat in more senses than one, while Bond is an alluring mix of emotional detachment and death-defying heroics. Pure Pleasure.' * METRO *
'Ultimately, Horowitz seems to me to have captured the spirit of Fleming more successfully than his recent illustrious predecessors in the Bond-sequel game.' -- Jake Kerridge * Daily Telegraph *
Trigger Mortis is cool and restrained... Fleming's best work was possessed of a rather insouciant tone; a wry, weary, mid-century tone that Horowitz captures exactly. * NEW STATESMAN *
The tension-filled opening sequence is there, the threat to world peace, the race to prevent central Manhattan being blown to smithereens, beautiful women and dodgy gangsters, but, somehow, Bond is more likeable. Daniel Craig would be hard pushed to describe this one as sexist and misogynistic. Mr Horowitz has introduced us to a more rounded hero, but one who won't disappoint the traditionalists. * COUNTRY LIFE *
'Horowitz's brings her [Pussy Galore] back as something like a three-dimensional woman, giving her an arc that surpasses Bond's hackneyed Freudian masculinity... He delivers the tersely precise prose that makes Bond so compelling, but more than that, he also supplies touches of Fleming's cruel poetry.' * GUARDIAN *
'Horowitz has an amazing facility for narrating action, and the set-pieces are terrific... the final 50 pages pass in a breathless rush of excitement.' * SUNDAY TIMES *
Anthony Horowitz produced as good an ersatz James Bond novel as one could hope for in TRIGGER MORTIS * DAILY TELEGRAPH - Christmas Books *
A fast-paced Cold War thriller that should please literary Bond fans... a modern take on a period series: Bond doesn't seem quite as cold and brutal as Fleming's original and in a couple of places, the writer's 21st century morality seems to seep almost unconsciously through. * YORKSHIRE POST *
'All elements are in place. We have the fast cars, the dead-eyed villain with a penchant for playing cards, a mysterious woman and an intricate plot involving rockets.' * RTE GUIDE *
'A cocktail of speed, danger, strong women and fiendish villains.' * GAINSBOROUGH ECHO *
'A pacy Cold War thriller that will please Bond fans.' * OLDHAM EVENING CHRONICLE *
Fervent fans and completists will likely not be disappointed. * Weekend Australian *
Bond and his creator have been under siege from the second-rate and politically censorious for decades. It has taken 50 years for one author, Anthony Horowitz, to finally deliver the respectful and tender homage both have long deserved. It is a cause for celebration. * Canberra Times, Saturday Age Melbourne, Sydney Morning Herald *
Endorsed by the Bond estate, Anthony Horowitz does a sterling job of bringing the spy's bygone era to life, helped in part by access to Fleming's papers. * Herald Sun, Melbourne *
The Fleming chapter slips in almost seamlessly, a testament to how attentive Horowitz has been to his master's style. * GUARDIAN *
"A masterly feat of literary ventriloquism." * TIMES *
"A pleasingly modern perspective while still managing to retain the essence of Ian Fleming's original novels. It also happens to be a great read." * CHOICE *
'If you like the original Bond books it's a safe bet that you'll like Trigger Mortis, too. Horowitz captures the flavour and feel of the originals.' * CRIMEREVIEW *
'Break-neck pace, complex and entertaining plot, and thrilling action... Expertly structured with plenty of twists and turns, this is classic Bond.' * BOOKBAG *

Anthony Horowitz is one of the UK's most prolific and successful writers. His novels The House of Silk and Moriarty were Sunday Times Top 10 bestsellers and sold in more than thirty-five countries around the world. His bestselling Alex Rider series for children has sold more than nineteen million copies worldwide. He is also the author of a James Bond novel, Trigger Mortis.

As a TV screenwriter he created both Midsomer Murders and the BAFTA-winning Foyle's War; other TV work includes Poirot, the widely-acclaimed mini-series Collision and Injustice and most recently, New Blood for the BBC. Anthony sits on the board of the Old Vic and regularly contributes to a wide variety of national newspapers and magazines. In January 2014 he was awarded an OBE for services to literature. Anthony Horowitz lives in London.

GOR007437453
Trigger Mortis: A James Bond Novel by Anthony Horowitz
Anthony Horowitz
Used - Very Good
Paperback
Orion Publishing Co
2016-05-19
320
1409159140
9781409159148
N/A
Book picture is for illustrative purposes only, actual binding, cover or edition may vary.
This is a used book - there is no escaping the fact it has been read by someone else and it will show signs of wear and previous use. Overall we expect it to be in very good condition, but if you are not entirely satisfied please get in touch with us.