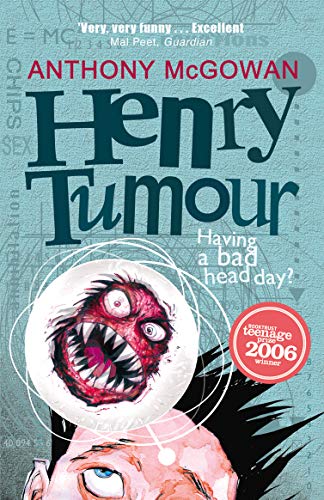 Used Price
£2.99
New RRP £7.99
Free Shipping in the UK
WINNER OF THE 2006 BOOKTRUST TEENAGE PRIZE It wasn't my choice: Henry was in charge. Controlling his speech and brain chemicals is one thing, but soon Henry Tumour is trying to make more decisions about Hector's life than he'd like.
Reviews:
Trustpilot
Very Good

WINNER OF THE 2006 BOOKTRUST TEENAGE PRIZE It wasn't my choice: Henry was in charge. As if school bullies and his mum's tofu sandwiches weren't enough for Hector Brunty, he now has another dilemma: a talking brain tumour. Henry Tumour turns out to be the perfect alter-ego, advising Hector on haircuts, high-fashion, and tactics for snogging the best-looking girl in school, Uma Upshaw. Controlling his speech and brain chemicals is one thing, but soon Henry Tumour is trying to make more decisions about Hector's life than he'd like. Can Hector overpower his tumour in order to get what he really wants . . . before they both go under the knife?

"For style and wit, it is head and shoulders above most teen fiction published this year" -- Amanda Craig * The Times *
"I loved, loved, loved this book. It's vivid, it's anarchic, it's unbearably cool . . . It's also very, very funny. There were moments when I had to put it down because I was howling with laughter . . . And if so much hilarity weren't enough, it's also very clever" -- Jill Murphy * thebookbag.co.uk *
"A book to get teenage boys reading for the hell of it . . . A dark and funny book" -- Phil Hogan * Observer *
"Definitely the funniest, most obscenely wise book I have read in a long time" -- Theo Temple, Booktrust Teenage Prize judge * The Times *
"Every writer hates to hear the words "stunning new talent" applied to someone else, but in the case of Anthony McGowan nothing else will do" -- Meg Rosoff

Anthony McGowan was born in Manchester in 1965. Educated at a Catholic comprehensive, he won't say that his character's schooldays are exactly based on his own but he certainly writes from experience. Before turning to writing full-time, Anthony gained a PhD in Philosophy, worked as a nightclub bouncer, an Open University tutor, a journalist and a civil servant. He is married with two children. Henry Tumour is his second novel for teenagers, and is set in the same school as Hellbent, which was shortlisted for the 2006 Branford Boase Award.

GOR001367382
Henry Tumour by Anthony McGowan
Anthony McGowan
Used - Very Good
Paperback
Random House Children's Publishers UK
2007-04-05
320
009948823X
9780099488231
N/A
Book picture is for illustrative purposes only, actual binding, cover or edition may vary.
The book has been read but remains in clean condition. All pages are intact and the cover is intact. Some minor wear to the spine.