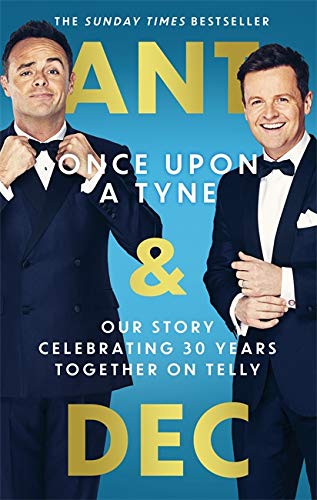 Once Upon A Tyne
by Anthony McPartlin

Used Price
£6.99
New RRP £20.00
Free Shipping in the UK
Celebrating 30 years together, Ant & Dec look back on three decades in the spotlight, with the full behind-the-scenes story and never-before-seen photos of the shows that made them the nation's best loved stars.
Very Good

Once Upon A Tyne Summary

Once Upon A Tyne: Our story celebrating 30 years together on telly by Anthony McPartlin

Ant and Dec hold a special place in the hearts of TV viewers everywhere. This is their epic story, with never-before-seen photography and the very best tales from their 30 years in TV.

Ant: As the old Chinese proverb says, 'Good things come in pairs'.
Dec: And as another Chinese proverb says, 'If you've been in a double act with your best mate for thirty years, why not write a book about all your most memorable moments in three decades of showbusiness?'
Ant: Less catchy that one, isn't it?
Dec: But no less true. And after three decades together, we're writing that book. Covering everything from a pirate radio storyline in Byker Grove through to the biggest shows on telly, this is our story.
Ant: Thirty years, eh? Amazing.
Dec: Absolutely. Especially when you consider we are both still 27 years old.

From their modest beginnings in Byker Grove through to their "unique" time as pop stars and an award-laden TV career, the last three decades have flown by in the blink of an eye. They've also featured an incredible cast of supporting characters, including their first scriptwriter (an unknown comedian called David Walliams), Saturday night fun and games with countless Hollywood A-listers, and celebrities they torture - sorry, work with - every year in the jungle. Told through the lens of every TV show they've made, as well as everything they've learnt along the way, this is the riotously funny journey of two ordinary lads from Newcastle who went on to achieve extraordinary things.

After first appearing on Byker Grove together in 1990, Ant and Dec's career has since spanned 30 years across TV, film and music. They have a combined social media following of over 13 million people, they've won over 100 awards - including 19 Best Presenter Awards at the NTAs, 13 BAFTAs and 1 Guinness World Record - and even bagged a chart Number 1 in 2013 for 'Let's Get Ready to Rhumble' (almost 20 years after the song's original release). Their debut book, first published in 2009, sold over 360,000 copies. They are active supporters of several charities, including being ambassadors for the Prince's Trust and NSPCC . They were both born and raised in Newcastle.

GOR010749795
Once Upon A Tyne: Our story celebrating 30 years together on telly by Anthony McPartlin
Anthony McPartlin
Used - Very Good
Hardback
Little, Brown Book Group
2020-09-03
304
075158097X
9780751580976
N/A
Book picture is for illustrative purposes only, actual binding, cover or edition may vary.
This is a used book - there is no escaping the fact it has been read by someone else and it will show signs of wear and previous use. Overall we expect it to be in very good condition, but if you are not entirely satisfied please get in touch with us.