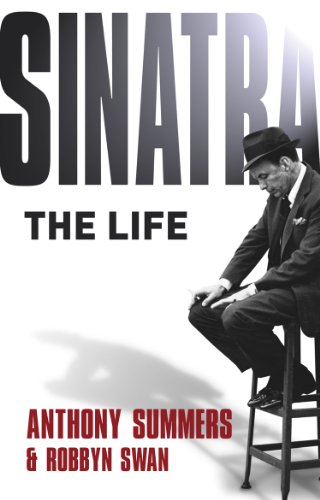 In Stock
£4.49
'To hell with the calendar,' a music critic wrote before his death in 1998, 'The day Frank Sinatra dies, the twentieth century is over.'There have been many books about Sinatra, but the last comprehensive biography was Kitty Kelly's HIS WAY, published in 1986.
Very Good
6 in stock

Sinatra: The Life by Anthony Summers

In 1941, at age twenty-five, Sinatra told a friend, 'I'm going to be the best singer in the world'. Two years on, the bobbysoxers were already weeping and screaming for him in their thousands. Half a century on Bono defined him as 'the Big Bang of popular music'. 'To hell with the calendar,' a music critic wrote before his death in 1998, 'The day Frank Sinatra dies, the twentieth century is over.' There have been many books about Sinatra, but the last comprehensive biography was Kitty Kelly's HIS WAY, published in 1986. it has taken renowned biographer Anthony Summers years to research this new biography, which promises to be the definitive story of a musical and film career spanning six decades. In this massively documented book, meticulous investigation is coupled with sensitivity to examine every aspect of Sinatra's life, public and private, from his obscure beginnings in an immigrant neighborhood in Jersey City to his twilight years as a living legend in Palm Springs. It tells the human story of an American icon who was irresistible to women and who was plagued throughout his life by scandal and hints of links with the Mafia. In this book, Summers finally uncovers the whole truth.

Anthony Summers worked for many years as a senior producer on Granada's World in Action and on the BBC's Panorama, and produced many landmark TV documentaries. His bestselling books include THE FILE ON THE TSAR, CONSPIRACY (about the JFK assasination which won the CWA Gold Dagger), GODDESS (about Marilyn Monroe) HONEYTRAP and THE ARROGANCE OF POWER (on Nixon). Robbyn Swan is a writer for VANITY FAIR, LIFE MAGAZINE and others.

GOR001138008
Sinatra: The Life by Anthony Summers
Anthony Summers
Used - Very Good
Paperback
Transworld Publishers Ltd
2006-03-27
624
0552153311
9780552153317
N/A
Book picture is for illustrative purposes only, actual binding, cover or edition may vary.
This is a used book - there is no escaping the fact it has been read by someone else and it will show signs of wear and previous use. Overall we expect it to be in very good condition, but if you are not entirely satisfied please get in touch with us.