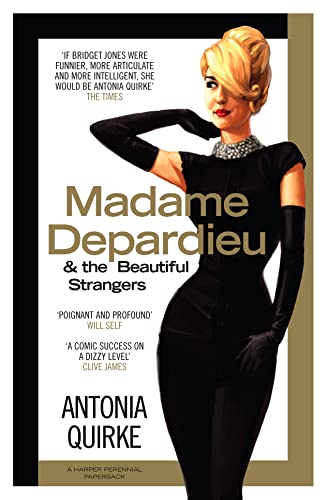 Madame Depardieu and the Beautiful Strangers
by Antonia Quirke

A razor-sharp and achingly funny memoir of the men and movies that shaped one woman's life.

Madame Depardieu and the Beautiful Strangers by Antonia Quirke

A razor-sharp and achingly funny memoir of the men and movies that shaped one woman's life.

A unique memoir, `Madame Depardieu and the Beautiful Strangers' is the story of how a young female film critic's love-life is affected and nearly ruined by her obsession with male movie stars. As her increasingly hapless hunt for the right man unfolds and her television and newspaper career unravels, our heroine finally begins to understand that difficult truth: that life is not like the movies.

Entwined with the narrative of her real-life love affairs is a kaleidoscope of digressions on great screen actors - her dream-life with Gerard Depardieu, a personal ad seeking out Tom Cruise, a disastrous climactic encounter with Jeff Bridges. It's a helter skelter ride through love and the movies which reads like a screwball comedy. And the screwball is our heroine, who seems to know everything about movies and the human heart, and nothing about anything else.

Written in a fresh and utterly engaging voice, `Madame Depardieu and the Beautiful Strangers' is both moving and hilarious, a bittersweet and endearingly honest one-off.

`It is difficult not to love Antonia Quirke, so just give in and give yourself up to this memoir...if Bridget Jones were funnier, more articulate and more intelligent, she would be Antonia Quirke.' The Times

'Poignant and profound.' Will Self

`Like being run over by a circus - and loving it. A brilliant book.' Julie Burchill

`Antonia Quirke writes like an angel. Truly comic and not just satirical, her enchanting debut is halfway between a book to read and a game to play. People who imagine they are the only ones who have read it will go on trading the names of male film stars until they realise that EVERYBODY has read it.' Clive James

'It is a terrific read and contains some of the best writing about actors I've encountered...I should have put it aside as unsuitable for my purposes after just 15 minutes but kept giving myself a few more pages, and then a few more, instead of getting down to work. So, if the above strikes you as hastily unfinished, blame [Antonia Quirke].' Independent

Antonia Quirke is a journalist and lives in London. Her first book `Jaws' was published by the BFI in 2003.

GOR001159458
Madame Depardieu and the Beautiful Strangers by Antonia Quirke
Antonia Quirke
Used - Very Good
Paperback
HarperCollins Publishers
2007-07-02
304
0007182767
9780007182763
N/A
Book picture is for illustrative purposes only, actual binding, cover or edition may vary.
This is a used book - there is no escaping the fact it has been read by someone else and it will show signs of wear and previous use. Overall we expect it to be in very good condition, but if you are not entirely satisfied please get in touch with us.