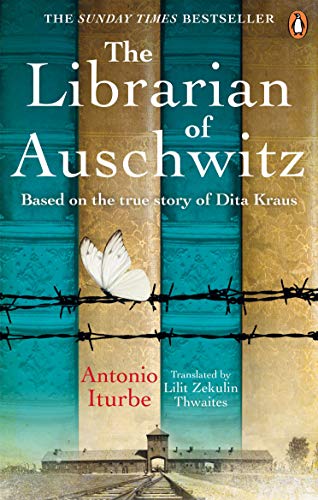 The Librarian of Auschwitz
by Antonio Iturbe

In Stock
4,49 £
And nowhere are they more dangerous than in Block 31 of Auschwitz, the children's block, where the slightest transgression can result in execution, no matter how young the transgressor...

The Sunday Times bestseller for readers of The Boy in the Striped Pyjamas, The Tattooist of Auschwitz and The Choice.

The Librarian of Auschwitz Summary

The Librarian of Auschwitz: The heart-breaking Sunday Times bestseller based on the incredible true story of Dita Kraus by Antonio Iturbe

For readers of The Tattooist of Auschwitz and The Choice: this is the story of the smallest library in the world - and the most dangerous.

'It wasn't an extensive library. In fact, it consisted of eight books and some of them were in poor condition. But they were books. In this incredibly dark place, they were a reminder of less sombre times, when words rang out more loudly than machine guns...'

Fourteen-year-old Dita is one of the many imprisoned by the Nazis at Auschwitz. Taken, along with her mother and father, from the Terezin ghetto in Prague, Dita is adjusting to the constant terror that is life in the camp. When Jewish leader Freddy Hirsch asks Dita to take charge of the eight precious books the prisoners have managed to smuggle past the guards, she agrees. And so Dita becomes the secret librarian of Auschwitz, responsible for the safekeeping of the small collection of titles, as well as the 'living books' - prisoners of Auschwitz who know certain books so well, they too can be 'borrowed' to educate the children in the camp.

But books are extremely dangerous. They make people think. And nowhere are they more dangerous than in Block 31 of Auschwitz, the children's block, where the slightest transgression can result in execution, no matter how young the transgressor...

The Sunday Times bestseller for readers of The Boy in the Striped Pyjamas, The Tattooist of Auschwitz and The Choice. Based on the incredible and moving true story of Dita Kraus, holocaust survivor and secret librarian for the children's block in Auschwitz.

The Librarian of Auschwitz Reviews

an unforgettable, heartbreaking novel * Publishers Weekly, starred review *
Like Markus Zusak's The Book Thief, it's a sophisticated novel with mature themes, delivering an emotionally searing reading experience. An important novel that will stand with other powerful testaments from the Holocaust era. * Booklist, starred review *
Though no punches are pulled about the unimaginable atrocity of the death camps, a life-affirming history. * Kirkus Reviews, starred review *
this novel is one that could easily be recommended... alongside Elie Wiesel's Night and The Diary of Anne Frank ...once read, will never be forgotten...A hauntingly authentic Holocaust retelling * School Library Journal *
an engrossing read, seamlessly translated from Iturbe's original Spanish. Iturbe retains the dignity and full horror of Dita's situation, while creating a narrative of hope and bravery in the face of fear. * Compass Magazine *

Lilit Zekulin Thwaites is an award-winning literary translator. After thirty years as an academic at La Trobe University in Australia, she retired from teaching and now focuses primarily on her ongoing translation and research projects.

Dita Kraus was born in Prague. In 1942, when Dita was thirteen years old , she and her parents were deported to Ghetto Theresienstadt and later to Auschwitz,. Neither of Dita's parents survived. After the war Dita married the author Otto B. Kraus. They emigrated to Israel in 1949, where they both worked as teachers They had three children. Since Otto's death in 2000 , Dita lives alone in Netanya. She has four grandchildren and four great grandchildren. Despite the horrors of the concentration camps, Dita has kept her positive approach to life.

GOR009679277
The Librarian of Auschwitz: The heart-breaking Sunday Times bestseller based on the incredible true story of Dita Kraus by Antonio Iturbe
Antonio Iturbe
Used - Very Good
Paperback
Ebury Publishing
2019-04-04
432
1529104777
9781529104776
N/A
Book picture is for illustrative purposes only, actual binding, cover or edition may vary.
This is a used book - there is no escaping the fact it has been read by someone else and it will show signs of wear and previous use. Overall we expect it to be in very good condition, but if you are not entirely satisfied please get in touch with us.