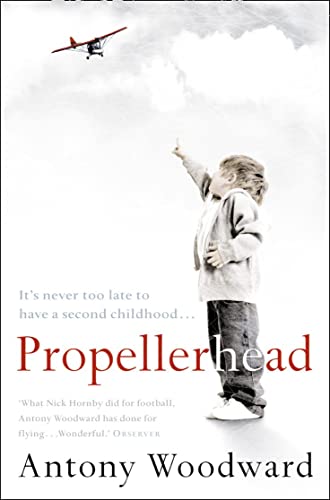 Join the real Magnificent Men in Their Flying Machines as they compete in the Round Britain race. .Woodward's warm, wry account of learning to fly will lift hearts everywhere. BBC2 documentary based on the book - 30 January 2012.

Join the real Magnificent Men in Their Flying Machines as they compete in the Round Britain race. .Woodward's warm, wry account of learning to fly will lift hearts everywhere. BBC2 documentary based on the book - 30 January 2012.

Antony Woodward wasn't interested in flying, he was interested in his image. So in his world of socialising and serial womanising, a microlight plane sounded like the ideal sex aid. So why - once he discovers that he has no ability as a pilot, it costs a fortune and its maddening unreliability loses him the one girl he really wants - does he get more and more hooked?

As he monitors the changes to the others in the syndicate; as he learns that there is a literal down-side to cheating in flying exams, shunning responsibility and pretending to know stuff you don't, the question keeps on surfacing. Why? As the misadventures mount - accidents, tussles with Tornadoes, arrest by the RAF - he keeps thinking he's worked it out. But it isn't until The Crash, in which he nearly kills himself and Dan (taking a short-cut in the Round Britain race) that the penny finally drops....

Flying is the antidote to modern life he didn't even know he needed. It's the supreme way to feel real.

`Inspirational...one of the best books ever written about flying.' PILOT, May 2011

`What Nick Hornby did for football, Antony Woodward has done for flying ... Wonderful.' OBSERVER

`Hilarious ... chock-full of incident, heartache, historical detail and near-death-experience, in as entertaining a non-fiction narrative as I have read ... Woodward has a gift for storytelling and comic timing and his acute awareness of the absurdities of maleness make this an impossible book not to like. INDEPENDENT

'A must-read for all pilots, everywhere, ever. But would I get in a plane with this nutter? F***, no.' (Captain) ALEX JAMES, BLUR

'Woodward's a truly terrible aviator - but his enthusiasm makes even the most timid flier want to take to the skies.' FHM

`A genuine original-smartly written, eccentric, funny, engaging, with just the right combination of anorak and anarchy...The flying sequences are fabulous, the historic ghosts of Bomber command are strangely moving, and the whole book stays wonderfully airborne throughout. It reminds me of the early lunatic Redmond O'Hanlon, and a bit of Roger Deakin's weird, soul-searching, swim-across-England book "Waterlog".' RICHARD HOLMES

'Lunatic... written so engagingly as to ensnare even those who know nothing about flying.' TIM BINYON, EVENING STANDARD

'Propellerhead is one of the best aviation books of the lot, and it has almost universal appeal...Take it from me, anyone who has even an incipient trace of flying in their blood will want to read Propellerhead.' PHILIP WHITEMAN, GENERAL AVIATION

'This eccentric, charming and poignant book is full of gems...sublime.' COUNTRY LIFE

Antony Woodward's first book, the bestselling flying memoir PROPELLERHEAD, published in 2001, was described by Pilot magazine in May 2011 as 'one of the best books about flying ever written'. His most recent book, THE GARDEN IN THE CLOUDS, Confessions of a Hopeless Romantic, about his obsession with making a garden on top of a Welsh mountain, was picked as Book of the Year 2010 by The Times and The Spectator and was a winner of the National Trust-Hay Festival Outdoors Books of the Year 2011.

GOR000933716
Propellerhead by Antony Woodward
Antony Woodward
Used - Very Good
Paperback
HarperCollins Publishers
2002-06-05
288
0007107293
9780007107292
N/A
Book picture is for illustrative purposes only, actual binding, cover or edition may vary.
This is a used book - there is no escaping the fact it has been read by someone else and it will show signs of wear and previous use. Overall we expect it to be in very good condition, but if you are not entirely satisfied please get in touch with us.