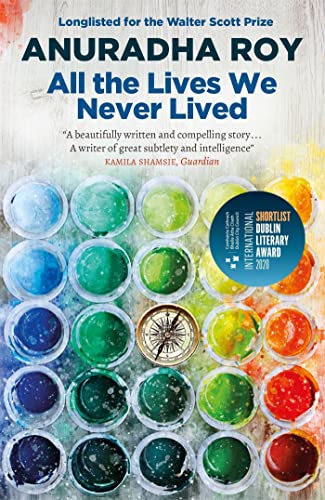 All the Lives We Never Lived
by Anuradha Roy

In Stock
£6.49
An artist's escape from a stultifying marriage is set against India's fight for independence and a world war, in a sweeping new novel by the Man Booker longlisted author of Sleeping on Jupiter
Very Good Good
5 in stock

All the Lives We Never Lived Summary

"A writer of great subtlety and intelligence . . . a beautifully written and compelling story of how families fall apart and what remains of the aftermath" Kamila Shamsie, winner of the Women's Prize for Fiction 2018

"The book everyone is talking about for the summer" Lorraine Candy, Sunday Times

In my childhood, I was known as the boy whose mother had run off with an Englishman" - so begins the story of Myshkin and his mother, Gayatri, who is driven to rebel against tradition and follow her artist's instinct for freedom.

Freedom of a different kind is in the air across India. The fight against British rule is reaching a critical turn. The Nazis have come to power in Germany. At this point of crisis, two strangers arrive in Gayatri's town, opening up for her the vision of other possible lives.

What took Myshkin's mother from India to Dutch-held Bali in the 1930s, ripping a knife through his comfortingly familiar environment? Excavating the roots of the world in which he was abandoned, Myshkin comes to understand the connections between anguish at home and a war-torn universe overtaken by patriotism.

Anuradha Roy's enthralling novel is a powerful parable for our times, telling the story of men and women trapped in a dangerous era uncannily similar to the present. Impassioned, elegiac, and gripping, it brims with the same genius that has brought Roy's earlier fiction international renown.

"One of India's greatest living authors" - O, The Oprah Magazine

All the Lives We Never Lived Reviews

From Sleeping on Jupiter to this book, Roy seems to be bettering her own brilliance. Though the narration is effortless, Roy's research and imagination in recreating a bygone era shines out. This is an excellent, unputdownable book -- Hansda Sowvendra Shekhar * The Hindu *
Roy's writing is a joy. * Financial Times. *
One of India's greatest living authors. * O, The Oprah Magazine. *
Every once in a great while, a novel comes along to remind you why you rummage through shelves in the first place. Why you peck like a magpie past the bright glitter of publishers' promises. Why you read...This, you think, is the feeling you had as you read Great Expectations or Sophie's Choice or The Kite Runner. This is why you read fiction at all. -- Marie Arana * Washington Post, on An Atlas of Impossible Longing *
The book everyone is talking about for the summer -- Lorraine Candy * Sunday Times *
A beautifully written and compelling story of how families fall apart and of what remains in the aftermath . . . [by] . . . a writer of great subtlety and intelligence. -- Kamila Shamsie * Guardian. *
Poetic, elegiac . . . Roy's eye is tender . . . The scope of All the Lives We Never Lived is vast but also personal. -- Sean Hewitt * Irish Times. *
Anuradha Roy blends historical fact and remarkable real-life characters into her tale, which takes freedom, in all its messy complexity, as its theme . . . Amid the atmospheric detailing there are pin-sharp modern resonances with modern India's nationalism and punishing patriarchy. -- Siobhan Murphy * The Times. *
A writer of great subtlety and intelligence . . . a beautifully written and compelling story of how families fall apart and what remains of the aftermath. -- Kamila Shamsie, winner of the Women's Prize for Fiction 2018 * Guardian *
[Roy] writes intelligently and elegantly, whatever the subject matter, be it love, patriarchy or the sweltering landscape. -- Anthony Cummins * Sunday Sport. *
Taking in the second world war, the fight for Indian independence and occasionally fast-forwarding into the 1990s, All the Lives We Never Lived is ultimately both a work of beautifully realised history and personal narrative. The cover blurb tells us that Roy is 'one of India's greatest living authors'. On this evidence it's hard to disagree. -- David Patrikarakos * Spectator. *
All the Lives We Never Lived is a moving and beautiful story of loss, of the lives of those beloved to us. What makes this novel so special is the sinuous way Anuradha Roy seamlessly and masterfully shuttles between time, overlaying the past with the present, mystery with knowledge to cumulatively create a brilliant tapestry that is the story -- Chigozie Obioma
Anuradha Roy should be on every literary Indophile's list. She's such a gorgeous writer of prose, her four novels capture small-town India with all its beauty and contradiction. -- Tishani Doshi, author of SMALL DAYS AND NIGHTS

Anuradha Roy's novel Sleeping on Jupiter was longlisted for the Man Booker Prize in 2016 and won the D.S.C. prize for South Asian Literature. She won the Economist Crossword Prize, India's premier award for fiction, for her novel The Folded Earth, which was nominated for several other prizes including the Man Asia, the D.S.C., and the Hindu Literary Award. Her first novel, An Atlas of Impossible Longing, has been widely translated and was named one of the best books of the year by the Washington Post and The Seattle Times.

GOR009935626
All the Lives We Never Lived by Anuradha Roy
Anuradha Roy
Used - Very Good
Paperback
Quercus Publishing
2019-05-02
336
0857058185
9780857058188
N/A
Book picture is for illustrative purposes only, actual binding, cover or edition may vary.
This is a used book - there is no escaping the fact it has been read by someone else and it will show signs of wear and previous use. Overall we expect it to be in very good condition, but if you are not entirely satisfied please get in touch with us.