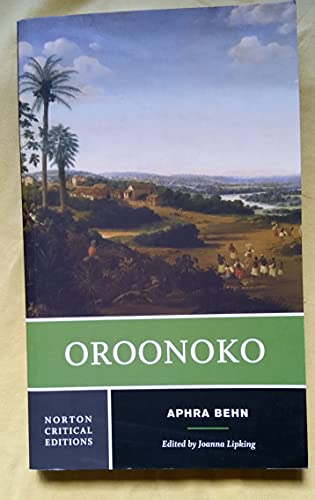 In Stock
£6.49
This long-awaited Norton Critical Edition of Aphra Behn's best-known and most influential work makes available the original 1688 text, the only text published in her lifetime.
Very Good Well Read
9 in stock

"Historical Backgrounds" is an especially rich collection of seventeenth-and eighteenth-century documents about colonizers and slaves in the new world. Topically arranged-"Montaigne on America," "The Settling of Surinam," "Observers of Slavery, 1654-1712," "After Oroonoko: Noble Africans in Europe," and "Opinions on Slavery"-these selections create a revealing context for Behn's unusual story. Illustrations and maps are also included.

"Criticism" begins with an overview of responses to Behn and Oroonoko, from learned and popular writers of her time to Sir Walter Scott and Virginia Woolf, among others. Current critical interpretations are by William C. Spengemann, Jane Spencer, Robert L. Chibka, Laura Brown, Charlotte Sussman, and Mary Beth Rose.

A Chronology of Behn's life and a Selected Bibliography are included.

Aphra Behn flourished in the cosmopolitan world of the London playhouse and the court. It was she, Virginia Woolf wrote, "who earned [women] the right to speak their minds." Joanna Lipking is Lecturer in English at Northwestern University, where she has taught since 1979. A Columbia Ph.D., she writes on women's emergence in print culture. Her articles and reviews on Aphra Behn and other early women writers appear in Studies in the Eighteenth Century, The Eighteenth Century: A Current Bibliography, and the recent Cambridge University Press collection, Aphra Behn Studies.

GOR001190568
Oroonoko by Aphra Behn
Aphra Behn
Norton Critical Editions
Used - Very Good
Paperback
WW Norton & Co
1997-01-17
288
0393970140
9780393970142
N/A
Book picture is for illustrative purposes only, actual binding, cover or edition may vary.
This is a used book - there is no escaping the fact it has been read by someone else and it will show signs of wear and previous use. Overall we expect it to be in very good condition, but if you are not entirely satisfied please get in touch with us.