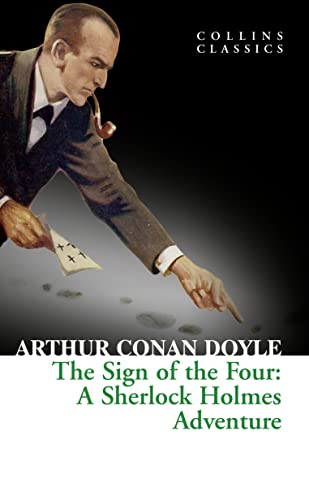 The Sign of the Four
by Arthur Conan Doyle

The Sign of the Four (Collins Classics) by Arthur Conan Doyle

'I abhor the dull routine of existence. I crave for mental exaltation. That is why I have chosen my own particular profession, or rather created it, for I am the only one in the world...'

In London, 1888, the razor-sharp detective skills of Sherlock Holmes are to be put to the test. Mary Morstan reports two seemingly unconnected and inexplicable events: the disappearance of her father, a British Indian Army Captain, and the arrival of pearls by post from an unknown sender. Driven on by its complexity, Holmes and Watson slowly begin to unravel an intricate web of exotic treasure, secret pacts and mysterious deaths.

One of only four novels featuring Sherlock Holmes and his trusty sidekick Watson, 'The Sign of the Four' will delight those who have been captivated by Arthur Conan Doyle's short stories.

'Of all the Holmes stories it is 'The Sign of Four' which remains persistently in my memory.' Graham Greene

Sir Arthur Conan Doyle (1859-1930) was a Scottish physician and writer. He is internationally renowned for his tales of the detective Sherlock Holmes, which have been turned into immensely popular films, comics and TV series. Conan Doyle's work included mystery, fantasy and science fiction, as well as poetry, stories, plays, novels and non-fiction.

GOR008678057
The Sign of the Four (Collins Classics) by Arthur Conan Doyle
Arthur Conan Doyle
Collins Classics
Used - Like New
Paperback
HarperCollins Publishers
2015-01-15
176
0008110468
9780008110468
N/A
Book picture is for illustrative purposes only, actual binding, cover or edition may vary.
The book has been read, but looks new. The book cover has no visible wear, and the dust jacket is included if applicable. No missing or damaged pages, no tears, possible very minimal creasing, no underlining or highlighting of text, and no writing in the margins.