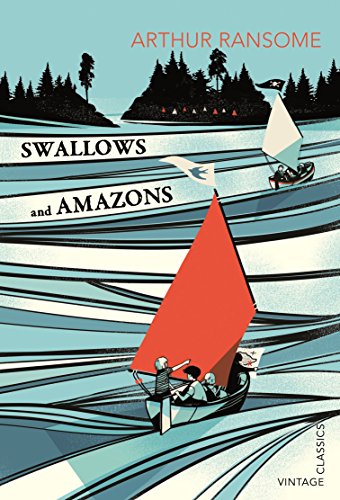 Swallows and Amazons
by Arthur Ransome

'Swallows and Amazons for ever!'

Rediscover this classic tale of adventure.

Swallows and Amazons by Arthur Ransome

'Swallows and Amazons for ever!'

Rediscover this classic tale of adventure.

The Walker children - also known as Captain John, Mate Susan, Able-Seaman Titty, and Ship's Boy Roger - set sail on the Swallow and head for Wild Cat Island. There they camp under open skies, swim in clear water and go fishing for their dinner. But their days are disturbed by the Blackett sisters, the fierce Amazon pirates. The Swallows and Amazons decide to battle it out, and so begins a summer of unforgettable discoveries and incredible adventures.

EXTRA ACTIVITIES INCLUDED: Crack the Swallow's code and learn all about the adventurous author in the brilliant extra educational resources included in this edition.

I read the entire series of Arthur Ransome's children's books as a child and thought they were absolutely fantastic. They were full of adventure, all sorts of exciting things happened and they were truly inspirational -- Ellen MacArthur
The book I remember most from childhood. I wanted to be with them on their escapist adventures with their boats and picnics and summer in beautiful Cumbria -- Miranda Hart * Daily Express *
You'll want to give this to your children as a window on a time when adventures came from swimming, fishing, camping and exploring rather than in an Xbox...The best line is when Nancy reveals that she is really called Ruth, but changed her name when she heard that pirates are ruthless * Independent *
A book that has stood the test of time... enchanting and escapist * Sunday Express *
My favourite was the first, Swallows and Amazons, which starts with Roger, aged seven, tacking his way up a field. I knew nothing of halyards, forestays, strops or sheaves, but I was enchanted by what Swallows Roger, Susan, John and Titty, and Nancy and Peggy, the Amazons, got up to with them so cleverly and bravely.My own summer holidays were never quite as exciting, and I never stopped longing to meet them all -- Sue MacGregor * Daily Telegraph *

Arthur Ransome was born in Leeds in 1884. He had an adventurous life - as a baby in he was carried by his father to the top of the Old Man of Coniston, a peak that is 2,276ft high! He went to Russia in 1913 to study folklore and in 1914, at the start of World War I he became a foreign correspondent for the Daily News. In 1917 when the Russian Revolution began he became a journalist and was a special correspondent of the Guardian. He played chess with Lenin and married Trotsky's personal secretary, Evgenia Petrovna Shelepina. On their return to England, he bought a cottage near Windermere in the Lake District and began writing children's stories. In a 1958 author's note, Ransome wrote: ''I have been often asked how I came to write Swallows and Amazons. The answer is that it had its beginning long, long ago when, as children, my brother, my sisters and I spent most of our holidays on a farm at the south end of Coniston. We played in or on the lake or on the hills above . . . Going away from it we were half drowned in tears. While away from it, as children and as grown-ups, we dreamt about it. No matter where I was, wandering about the world, I used at night to look for the North Star and, in my mind's eye, could see the beloved sky-line of great hills beneath it. Swallows grew out of those old memories. I could not help writing it. It almost wrote itself.'' He published the first of his children's classics, the twelve Swallows And Amazons books, in 1930. In 1936 he won the first ever Carnegie Medal for his book, Pigeon Post. He died in 1967.

GOR004725856
Swallows and Amazons by Arthur Ransome
Arthur Ransome
Used - Very Good
Paperback
Vintage Publishing
2012-08-01
528
0099572796
9780099572794
Winner of V&A Illustration Awards 2013 (UK)
Book picture is for illustrative purposes only, actual binding, cover or edition may vary.
This is a used book - there is no escaping the fact it has been read by someone else and it will show signs of wear and previous use. Overall we expect it to be in very good condition, but if you are not entirely satisfied please get in touch with us.