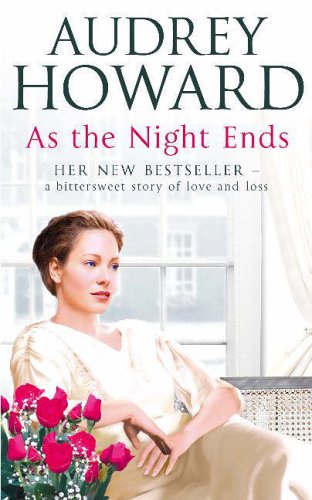 As the Night Ends
by Audrey Howard

In Stock
£4.49
A spellbinding new tale of love and tragedy from one of Hodder's top saga authors, backed by a fresh new look
Like New Very Good
Only 1 left

As the Night Ends Summary

As the Night Ends by Audrey Howard

Driven by her idealism and courage, Alex Goodwin will make any sacrifice to win votes for women. Her despairing family, unable to rescue her from yet another dangerous prison sentence, is overjoyed when Patrick O'Leary comes into her life. A hard-working young surgeon, Patrick is as idealistic as Alex and loves her with all his heart.

Then they are separated - first by a quarrel, then by the terrible war which engulfs their world, and finally, after a miraculous reunion, by a tragedy that seems to make it impossible for either of them ever to love again . . .

As the Night Ends Reviews

'Her thousands of fans recognise the artistry of a true storyteller.' Lancashire Life
'Among the dross that constitutes the Liverpool saga market for women, Howard's enjoyable 19th-century historical romance of crossed love shines out.' Daily Mail
'Poignant and well plotted, this is the book to curl up with to shut out troubles.' Woman's Realm on BEYOND THE SHINING WATER
'This saga is, like all of Audrey Howard's books, compelling and memorable . . . a joy to read.' The Historical Novels Review on A PLACE CALLED HOPE

Audrey Howard was born in Liverpool in 1929. Before she began to write she had a variety of jobs, among them hairdresser, model, shop assistant, cleaner and civil servant. In 1981, while living in Australia, she wrote the first of her bestselling novels. She lives in St Anne's on Sea, her childhood home.

GOR010517675
As the Night Ends by Audrey Howard
Audrey Howard
Used - Like New
Paperback
Hodder & Stoughton General Division
2005-09-12
480
0340824085
9780340824085
Short-listed for RNA Romantic Novel of the Year 2006 (UK)
Book picture is for illustrative purposes only, actual binding, cover or edition may vary.
The book has been read, but looks new. The book cover has no visible wear, and the dust jacket is included if applicable. No missing or damaged pages, no tears, possible very minimal creasing, no underlining or highlighting of text, and no writing in the margins.