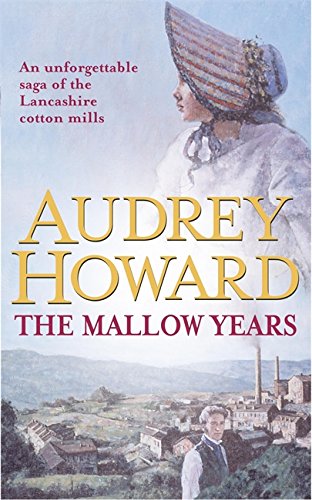 The Mallow Years
by Audrey Howard

This is the story between a daughter of a Lancashire mill-owner and a weaver and of how their love develops and is tested in a time of tragedy and unrest: the story continues in SHINING THREADS.

The Mallow Years by Audrey Howard

Kit Chapman is the beautiful daughter of a rich Lancashire mill-owner: a man who exploits his workpeople ruthlessly. She is to inherit the business - but only if she can prove herself as hard and determined as he.

Joss Greenwood is a weaver, driven with his family into abject poverty by the new machinery. Now his life is dedicated to the struggle against the factory owners.

Kit and Joss, two people from very different, hostile worlds, meet by chance up on the moors they both love. It is the start of a friendship that turns into a wild love that has to struggle for fulfilment through times of terrible distress, of violence and passion.
'Her thousands of fans recognise the artistry of a true storyteller' Lancashire Life

Among the dross that constitutes the Liverpool saga market for women, Howard's enjoyable 19th-century historical romance of crossed love shines out. * Daily Mail *
A stirring and dramatic romance. * prize quest.com on WHISPERS ON THE WATER *
This saga is, like all of Audrey Howard's books, compelling and memorable...a joy to read * The Historical Novels review on A PLACE CALLED HOP *
Poignant and well plotted, this is the book to curl up with to shut out troubles. * Woman's Realm on BEYOND THE SHINING WATER *
Her thousands of fans recognise the artistry of a true storyteller * Lancashire Life *
Life and middle class living in Liverpool in the early 1900's is the colourful backcloth for the latest novel from this master storyteller * Coventry Evening Telegraph *
Another blockbuster guaranteed to delight fans of widescreen saga story-telling. * Peterborough Evening Telegraph *
A well-rounded coming-of-age story...engrossing, emotionally intense page-turner * The Historical Novels Review on WHISPERS ON THE WA *

Audrey Howard was born in Liverpool in 1929. Before she began to write she had a variety of jobs, among them hairdresser, model, shop assistant, cleaner and civil servant. In 1981, while living in Australia, she wrote the first of her bestselling novels. Here fourth novel, The Juniper Bush, won the Romantic Novel of the Year Award in 1988.She lives in St Anne's on Sea, her childhood home.

GOR000700065
The Mallow Years by Audrey Howard
Audrey Howard
Used - Very Good
Paperback
Hodder & Stoughton General Division
1991-03-21
592
0340542942
9780340542941
N/A
Book picture is for illustrative purposes only, actual binding, cover or edition may vary.
This is a used book - there is no escaping the fact it has been read by someone else and it will show signs of wear and previous use. Overall we expect it to be in very good condition, but if you are not entirely satisfied please get in touch with us.