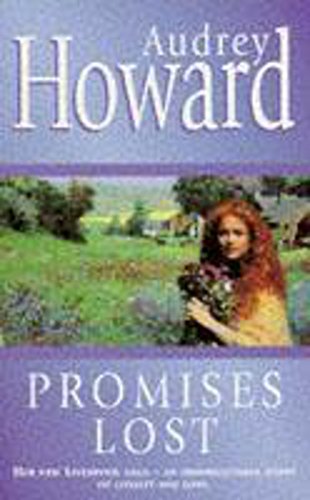 Sara Hamilton loves Jack Andews from the moment he risks his life to rescue her. As she nurses him back to health, the gently-reared doctor's daughter and the softly-spoken railway labourer discover an innocent yet steadfast passion.
But Sara's snobbish sister Alice hates Jack and all he stands for. When their father dies and leaves the sisters penniless and homeless, Alice is the one who decides they will go to Liverpool and make their fortunes as dressmakers. And ensures that Jack will never find Sara Hamilton again.
Soon they have found the security that Alice craves. But then Jack Andrews - now a successful railway engineer - comes to Liverpool. And Sara, who has never forgotten him, has grown from a shy girl to a passionate woman with a mind of her own.

'Among the dross that constitutes the Liverpool saga market for women, Howard's enjoyable 19th-century historical romance of crossed love shines out. * Daily Mail, 3.1.97 *
Her thousands of fans recognise the artistry of a ture storyteller * Lancashire Life *

Audrey Howard was born in Liverpool in 1929. Before she began to write she had a variety of jobs, among them hairdresser, model, shop assistant, cleaner and civil servant. In 1981 she wrote the first of her novels when she was out of work and living in Australia. There are now more than twenty, and her fourth, The Juniper Bush, won the Boots Romantic Novel of the Year Award in 1988. She now divides her time between her childhood home, St Anne's on Sea, Lancashire, and a home in the Yorkshire Dales.

GOR000348954
Promises Lost by Audrey Howard
Audrey Howard
Used - Very Good
Paperback
Unknown
0
0340666013
9780340666012
N/A
Book picture is for illustrative purposes only, actual binding, cover or edition may vary.
This is a used book - there is no escaping the fact it has been read by someone else and it will show signs of wear and previous use. Overall we expect it to be in very good condition, but if you are not entirely satisfied please get in touch with us.