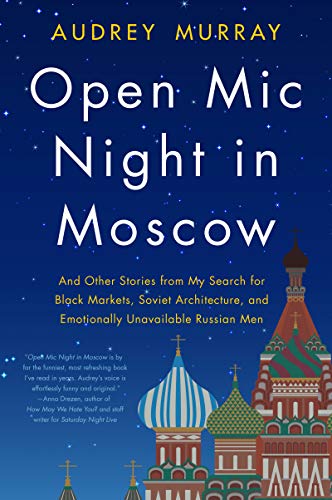 Open Mic Night in Moscow: And Other Stories from My Search for Black Markets, Soviet Architecture, and Emotionally Unavailable Russian Men by Audrey Murray

The raucous and surprisingly poignant story of a young, Russia-obsessed American writer and comedian who embarked on a solo tour of the former Soviet Republics, never imagining that it would involve kidnappers, garbage bags of money, and encounters with the weird and wonderful from Mongolia to Tajikistan.

Kazakhstan, Belarus, and Siberia are not the typical tourist destinations of a twenty-something, nor the places one usually goes to eat, pray, and/or love. But the mix of imperial Russian opulence and Soviet decay, and the allure of emotionally unavailable Russian men proved strangely irresistible to comedian Audrey Murray.

At age twenty-eight, while her friends were settling into corporate jobs and serious relationships, Audrey was on a one-way flight to Kazakhstan, the first leg of a nine-month solo voyage through the former USSR. A blend of memoir and offbeat travel guide, this thoughtful, hilarious catalog of a young comedian's adventures is also a diary of her emotional discoveries about home, love, patriotism, loneliness, and independence.

Sometimes surprising, often disconcerting, and always entertaining, Open Mic Night in Moscow will inspire you to take the leap and embark on your own journey into the unknown. And, if you want to visit Chernobyl by way of an insane-asylum-themed bar in Kiev, Audrey can assure you that there's no other guidebook out there. (She's looked.)

Audrey Murray is a redhead from Boston who moved to China and became a standup comedian. The co-founder of the Kung Fu Komedy, Audrey was named the funniest person in Shanghai by City Weekend magazine. Audrey is a staff writer for Reductress.com and a regular contributor at Medium.com; her writing has also appeared in The Gothamist, China Economic Review, Nowness, Architizer, and on the wall of her dad's office. Audrey has appeared on the Lost in America, Listen to This!, and Shanghai Comedy Corner podcasts, on CNN and ICS, and in Shanghai Daily, Time Out, Smart Shanghai, That's Shanghai, and City Weekend. She recently published her first memoir, Open Mic Night in Moscow.

GOR010306754
Open Mic Night in Moscow: And Other Stories from My Search for Black Markets, Soviet Architecture, and Emotionally Unavailable Russian Men by Audrey Murray
Audrey Murray
Used - Like New
Paperback
HarperCollins Publishers Inc
2019-08-19
416
0062909843
9780062909848
N/A
Book picture is for illustrative purposes only, actual binding, cover or edition may vary.
The book has been read, but looks new. The book cover has no visible wear, and the dust jacket is included if applicable. No missing or damaged pages, no tears, possible very minimal creasing, no underlining or highlighting of text, and no writing in the margins.