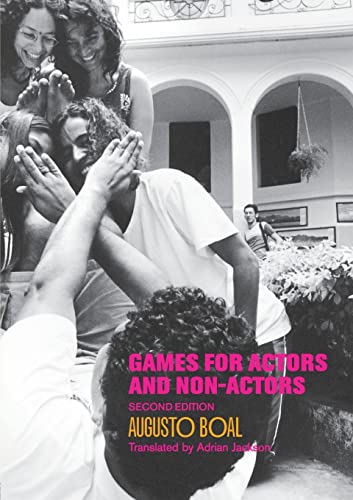 Games for Actors and Non-Actors
by Augusto Boal

In Stock
£17.99
This is the classic and best selling book by the founder of Theatre of the Oppressed, Augusto Boal, including new discussions, a new introduction and a collection of images.
Very Good Good Well Read
Only 1 left

Games for Actors and Non-Actors Summary

Games for Actors and Non-Actors by Augusto Boal

Games for Actors and Non-Actors is the classic and best selling book by the founder of Theatre of the Oppressed, Augusto Boal. It sets out the principles and practice of Boal's revolutionary Method, showing how theatre can be used to transform and liberate everyone - actors and non-actors alike!

Games for Actors and Non-Actors Reviews

"This is an inspiring and powerful book, a lucid account that will be of substantial use to people already using "Theatre of the Oppressed." It should also act as an excellent introduction for those new to the system." - Artscene

"This is a useful handbook for those who want to explore Boal's 'Theatre of the Oppressed' and as such is greatly to be welcomed. Boals' work deserves and demands emulation." - Theatre Research International

"You have achieved what Brecht only dreamt of and wrote about: making a useful theatre that is entertaining, fun, and instructive. It is a different kind of theatre - a kind of social therapy.it focuses the mind, relaxes the spirit, and gives people a new handle on their situations." - Richard Schechner

Augusto Boal is a theatre director, dramatist, theorist, writer and teacher. He was a Member of Parliament for Rio de Janeiro from 1993-1996. He is the author of Theatre of the Oppressed, Games for Actors and Non-Actors, Rainbow of Desire, Legislative Theatre, and Hamlet and the Baker's Son: My Life in Theatre and Politics. Adrian Jackson is Artistic Director of Cardboard Citizens. He has translated four books by Augusto Boal, collaborated on a number of occasions and taught Theatre of the Oppressed widely in other countries, including Namibia, South Africa, Hong Kong, Mauritius and Finland.

Introduction: A New System of Exercises and Games From The Theatre of The Oppressed. Two Unities. Five Categories of Game and Exercise. I. Feeling What We Touch (Re-structuring Muscular Relations) II. Listening to What We Hear III. Dynamising Several Senses IV. Seeing What We Look At V. The Memory of the Senses. IMAGE THEATRE: Image Techniques: Models and Dynamisations 1. Image of the Word 2. Image of transition 3. Multiple image of oppression 4. Multiple image of happiness 5. Image of the Group 6. Ritual Gesture 7. Ritual 8. Rituals and masks 9. The Image of the Hour 10. The Kinetic Image 11. The Merry-Go-Round of Images. IMAGES OF TRANSITION - The Technique in action: Examples from Europe, New Image Theatre techniques, The cop in the head techniques, Four Very Simple Demonstrations of Some Embryos of Forum Theatre Pieces, Still As Projected Images. Rehearsal Exercises for Any Kind of Play, Exercises for the preparation of a Forum Theatre Model or for the rehearsal of other kinds of theatre, The Early Forms of Forum Theatre: The Rules of the Games, Dramaturgy, Staging, The Performance Games, Examples of Forum Theatre. First Experiences With Invisible Theatre, Forum Theatre: Doubts and Certainties, Artistic Creation and Divine Madness, The Pedagogy of Fear - Theatre and the Twin Towers.

GOR002627055
Games for Actors and Non-Actors by Augusto Boal
Augusto Boal
Used - Very Good
Paperback
Taylor & Francis Ltd
2002-08-22
336
0415267080
9780415267083
N/A
Book picture is for illustrative purposes only, actual binding, cover or edition may vary.
This is a used book - there is no escaping the fact it has been read by someone else and it will show signs of wear and previous use. Overall we expect it to be in very good condition, but if you are not entirely satisfied please get in touch with us.