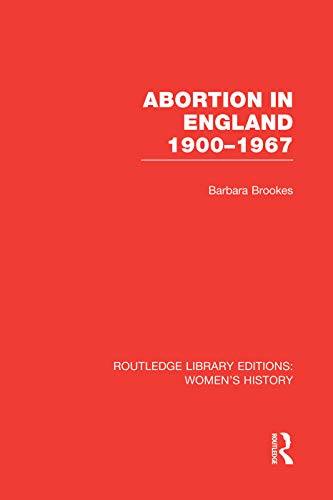 Over the decades from 1900 to 1967 abortion was transformed from an important female-centred form of fertility control into a medical event, closely monitored by the State. This transition, the author argues here, took place against a background of debate over fertility control and its implications for women's maternal role.

The book, originally published in 1988, suggests that the inter-war years saw a crucial mapping of boundaries in the debates over abortion. The distinction between methods of fertility control used before and after conception was more sharply drawn. The abortion law was difficult to enforce and in 1936 the Abortion Law Reform Association was founded by feminists to call for safe legal abortion as a woman's right.

Resort to criminal abortion continued in the post-war years and the number of therapeutic abortions also began to increase. The medical profession's attempt to create a distinction between worthy medical and spurious social reasons for fertility control gave way in the face of women's demands for safe and effective means to plan when and if they would have children. After a hard-fought battle, the abortion law was reformed in 1967. The abortion decision, however, remained firmly in the hands of the medical profession.

Introduction 1. Abortion in the Early Twentieth Century 2. The Abortion Law: Theory and Practice 3. The Medical Profession and Abortion, 1900-1939 4. Women and Abortion Law Reform 5. An Official Investigation: The Birkett Committee 6. Towards Reform, 1939-1967. Conclusion. Appendices

GOR009956167
Abortion in England 1900-1967 by Barbara Brookes (University of Otago, Dunedin, New Zealand)
Barbara Brookes (University of Otago, Dunedin, New Zealand)
Routledge Library Editions: Women's History
Used - Very Good
Paperback
Taylor & Francis Ltd
2014-04-10
208
0415752469
9780415752466
N/A
Book picture is for illustrative purposes only, actual binding, cover or edition may vary.
This is a used book - there is no escaping the fact it has been read by someone else and it will show signs of wear and previous use. Overall we expect it to be in very good condition, but if you are not entirely satisfied please get in touch with us.