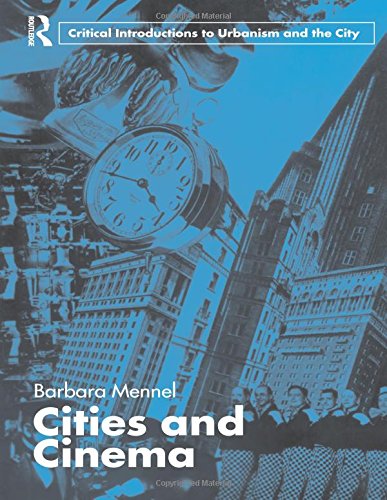 Cities and Cinema
by Barbara Mennel (University of Florida, USA)

In Stock
£12.99
How does cinema rework city planners' hopes and city dwellers' fears of modern urbanism? Can an analysis of city films answer some of the questions posed in urban studies? This book suggests that modernity links urbanism and cinema. It is suitable for students and researchers of film studies, urban studies and cultural studies.
Very Good
Only 1 left

Cities and Cinema by Barbara Mennel (University of Florida, USA)

Films about cities abound. They provide fantasies for those who recognize their city and those for whom the city is a faraway dream or nightmare. How does cinema rework city planners' hopes and city dwellers' fears of modern urbanism? Can an analysis of city films answer some of the questions posed in urban studies? What kinds of vision for the future and images of the past do city films offer? What are the changes that city films have undergone?

Cities and Cinema puts urban theory and cinema studies in dialogue. The book's first section analyzes three important genres of city films that follow in historical sequence, each associated with a particular city, moving from the city film of the Weimar Republic to the film noir associated with Los Angeles and the image of Paris in the cinema of the French New Wave. The second section discusses socio-historical themes of urban studies, beginning with the relationship of film industries and individual cities, continuing with the portrayal of war torn and divided cities, and ending with the cinematic expression of utopia and dystopia in urban science fiction. The last section negotiates the question of identity and place in a global world, moving from the portrayal of ghettos and barrios to the city as a setting for gay and lesbian desire, to end with the representation of the global city in transnational cinematic practices.

The book suggests that modernity links urbanism and cinema. It accounts for the significant changes that city film has undergone through processes of globalization, during which the city has developed from an icon in national cinema to a privileged site for transnational cinematic practices. It is a key text for students and researchers of film studies, urban studies and cultural studies.

Barbara Mennel is an Assistant Professor of German Studies and Cinema Studies in the Department of Germanic and Slavic Studies and in the Film and Media Program at the University of Florida, Gainesville. She is author of The Representation of Masochism and Queer Desire in Literature and Film (2007).

Section 1 1. Modernity and the City Film: Berlin 2. The Dark City: Film Noir - Los Angeles 3. The City of Love: Paris Section 2 4. City Film Industry: Hong Kong 5. The Divided City and the City in Ruins: Belfast, Beirut, and Berlin 6. Utopia and Dystopia: Fantastic and Virtual Cities Section 3 7. Ghettos and Barrios 8. The City as Queer Playground 9. The Global City and Cities in Globalization. Conclusion: From the Train Effect to the Favela Effect: How to do Further Research. Filmography. Bibliography

GOR003566108
Cities and Cinema by Barbara Mennel (University of Florida, USA)
Barbara Mennel (University of Florida, USA)
Routledge Critical Introductions to Urbanism and the City
Used - Very Good
Paperback
Taylor & Francis Ltd
2008-03-31
256
0415364469
9780415364461
N/A
Book picture is for illustrative purposes only, actual binding, cover or edition may vary.
This is a used book - there is no escaping the fact it has been read by someone else and it will show signs of wear and previous use. Overall we expect it to be in very good condition, but if you are not entirely satisfied please get in touch with us.