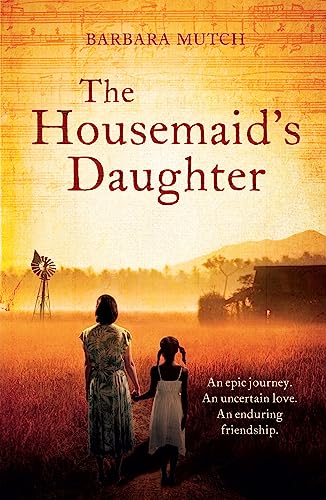 The Housemaid's Daughter
by Barbara Mutch

A South African THE HELP, THE HOUSEMAID'S DAUGHTER is a startling and thought-provoking debut novel which intricately portrays the drama, dynamics and heartbreak of two women against the backdrop of a beautiful yet divided land.

The Housemaid's Daughter by Barbara Mutch

Duty and love collide on the arid plains of central South Africa. Previously released as 'Karoo Plainsong' this is a fully revised debut novel.

Cathleen Harrington leaves her home in Ireland in 1919 to travel to South Africa and marry the fiance she has not seen for five years. Isolated and estranged in a harsh landscape, she finds solace in her diary and the friendship of her housemaid's daughter, Ada. Cathleen recognises in her someone she can love and respond to in a way that she cannot with her own husband and daughter. Under Cathleen's tutelage, Ada grows into an accomplished pianist, and a reader who cannot resist turning the pages of the diary, discovering the secrets Cathleen sought to hide.

When Ada is compromised and finds she is expecting a mixed-race child, she flees her home, determined to spare Cathleen the knowledge of her betrayal, and the disgrace that would descend upon the family. Scorned within her own community, Ada is forced to carve a life for herself, her child, and her music. But Cathleen still believes in Ada, and risks the constraints of apartheid to search for her and persuade her to return with her daughter. Beyond the cruelty, there is love, hope - and redemption.

'If you love last summer's THE HELP, try the HOUSEMAID'S DAUGHTER by Barbara Mutch... The friendship at its centre will leave your singing.' * Good Reads *
'This debut novel has echoes of Kathryn Stockett's THE HELP and is equally compelling... Ada's story is both an enjoyable and a very moving one, told with sensitivity and feeling.' * Welovethisbook.com *

Barbara Mutch is South African by birth and currently lives in Surrey but returns to South Africa every year. THE HOUSEMAID'S DAUGHTER is her first novel.

GOR004701398
The Housemaid's Daughter by Barbara Mutch
Barbara Mutch
Used - Very Good
Paperback
Headline Publishing Group
2013-01-03
416
0755392124
9780755392124
N/A
Book picture is for illustrative purposes only, actual binding, cover or edition may vary.
This is a used book - there is no escaping the fact it has been read by someone else and it will show signs of wear and previous use. Overall we expect it to be in very good condition, but if you are not entirely satisfied please get in touch with us.