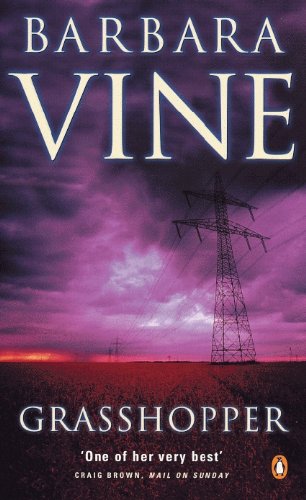 In Stock
£2.99
'They have sent me here because of what happened on the pylon'. When Clodagh Brown writes these words at the age of nineteen, she believes that she is leaving behind the traumatic events of her youth. But Clodagh soon learns that you can never entirely escape your past.
Very Good Good
7 in stock

Grasshopper is an enthralling, chilling novel by the bestselling queen of crime Barbara Vine

When Clodagh Brown writes these words at the age of nineteen, she believes that she is leaving behind the traumatic events of her youth. But Clodagh soon learns that you can never entirely escape your past.

In the aftermath of the incident on the pylon - a gargantuan electrified grasshopper - Clodagh goes off to university, moves into a basement flat arranged by her unsympathetic family, and finds freedom trekking across London's rooftops with a gang of neighborhood misfits. As she begins a thrilling relationship with a fellow climber, however, both Clodagh and the reader are haunted by the memory of the pylon and of the terrible thing that happened there - and by the eerie sense that another tragedy is just a footfall away.

Grasshopper is a modern crime masterpiece that will have you gripped from the first page to the last. If you enjoy the novels of P.D. James, Ian Rankin and Scott Turow, you will love this book.

Barbara Vine is the pen-name of Ruth Rendell. She has written fifteen novels using this pseudonym, including A Fatal Inversion and King Solomon's Carpet which both won the Crime Writers' Association Gold Dagger Award. Her other books include: A Dark Adapted Eye; The House of Stairs; Gallowglass; Asta's Book; No Night Is Too Long; In the Time of His Prosperity; The Brimstone Wedding; The Chimney Sweeper's Boy; Grasshopper; The Blood Doctor; The Minotaur; The Birthday Present and The Child's Child.

"The Vine novels are sublime works of psychological suspense...Grasshopper is as skillful as anything this wonderful writer has done."--The Seattle Times

"A typically elegant, and typically elegiac, turn from the woman with two award-winning names. And one superlative voice."--Fort Worth Star Telegram

Barbara Vine was the pen-name of Ruth Rendell, and Viking published all of her books under that name. Rendell was an exceptional crime writer, with worldwide sales of approximately 20 million copies, and regular Sunday Times bestsellers. Rendell won numerous awards, including the Crime Writers' Association Gold Dagger for 1976's best crime novel with A Demon in My View, a Gold Dagger award for Live Flesh in 1986, and the Sunday Times Literary Award in 1990. In 2013 she was awarded the Crime Writers' Association Cartier Diamond Dagger for sustained excellence in crime writing. In 1996 she was awarded the CBE and in 1997 became a Life Peer. Ruth Rendell died in May 2015.

GOR002663818
Grasshopper by Barbara Vine
Barbara Vine
Used - Very Good
Paperback
Penguin Books Ltd
2001-05-03
544
0140293027
9780140293029
N/A
Book picture is for illustrative purposes only, actual binding, cover or edition may vary.
This is a used book - there is no escaping the fact it has been read by someone else and it will show signs of wear and previous use. Overall we expect it to be in very good condition, but if you are not entirely satisfied please get in touch with us.