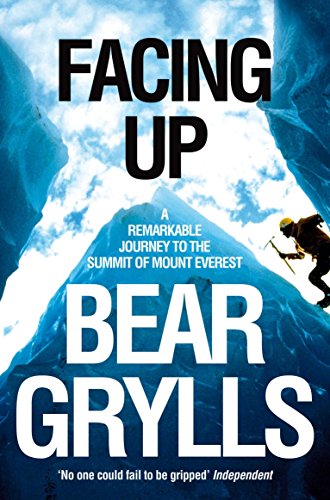 Facing Up
by Bear Grylls

In Stock
£3.99
A remarkable journey to the summit of Mount Everest, described as 'honest and compelling' by Sir Ranulph Fiennes.
Very Good Good
9 in stock

Facing Up: A Remarkable Journey to the Summit of Mount Everest by Bear Grylls

At the age of twenty-three, Bear Grylls became one of the youngest Britons to reach the summit of Mount Everest. At extreme altitude youth holds no advantage over experience, and it is generally acknowledged that younger climbers have more difficulty coping with the adverse effects of mountaineering. Nevertheless, only two years after breaking his back in a freefall parachuting accident, Bear Grylls overcame severe weather conditions, fatigue, dehydration and a last-minute illness to stand on top of the world's highest mountain. Facing Up is the story of his adventure, his courage and humour, his friendship and faith.

No one could fail to be gripped by his heartfelt excitement and emotion over what was the adventure of a lifetime. * Independent *
Bear's tale is by turns hilarious and horrific. * Daily Telegraph *
Written with refreshing humility, this is a briskly told account, not of conquering Everest, but of realizing its power. * Daily Mail *
A remarkable tale. * Daily Express *

Bear Grylls spent three years with the British Special Forces. During this time he had a horrendous parachuting accident in southern Africa, breaking his back in three places. Two years later he overcame the odds to become one of the youngest British climbers ever to reach the summit of Mount Everest, and this story forms the basis for his bestselling memoir, Facing Up. Looking for another adventure, Bear tackled the treacherous North Atlantic seas in Facing the Frozen Ocean. Bear Grylls is one of the most recognized faces of survival and outdoor adventure and one of the most successful motivational speakers on the world circuit.

GOR001211367
Facing Up: A Remarkable Journey to the Summit of Mount Everest by Bear Grylls
Bear Grylls
Used - Very Good
Paperback
Pan Macmillan
2001-03-23
304
0330392263
9780330392266
N/A
Book picture is for illustrative purposes only, actual binding, cover or edition may vary.
This is a used book - there is no escaping the fact it has been read by someone else and it will show signs of wear and previous use. Overall we expect it to be in very good condition, but if you are not entirely satisfied please get in touch with us.