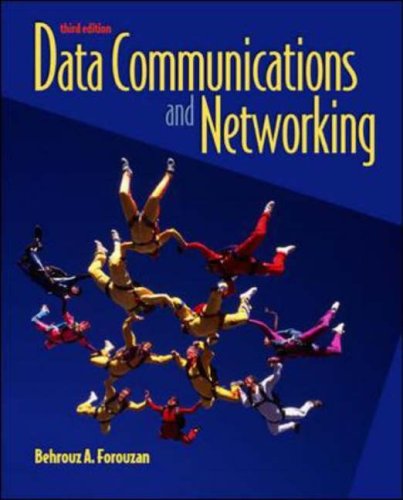 Data Communications and Networking
by Behrouz A. Forouzan

In Stock
£5.49
Provides a comprehensive introduction to networking technologies. This book uses figures to visually represent concepts and reflects the constantly changing world of network technologies, such as bluetooth, wireless and security coverage. It includes optional algorithm sections which allow instructors to adjust the level of math in the course.
Very Good
Only 1 left

Data Communications and Networking by Behrouz A. Forouzan

Data Communications and Networking 3/e provides a comprehensive and current introduction to networking technologies. The book is accessible to students from all backgrounds and uses hundreds of figures to visually represent concepts.

This new edition has been completely updated to reflect the constantly changing world of network technologies, such as bluetooth, wireless and updated security coverage. Optional algorithm sections have been added, which allow instructors to adjust the level of math that they would like to use in the course. The TCP/IP coverage has also been expanded and moved earlier in the new edition.

Forouzan's book continues to be supported by an On-line Learning Centre (OLC) that contains many extra resources for students and instructors. Some of the features include PowerPoints, solutions, self-quizzing, and Flash animations that illustrate concepts.

About Behrouz A. Forouzan

Behrouz A. Forouzan is a Professor at DeAnza College where he is involved in the development of Computer Information System courses. In addition he provides system development consulting with several companies. In addition to C and C++ books, Forouzan is the author of several other successful books, including Computer Networks: A Top-Down Approach, TCP/IP Protocol Suite, and Local Area Networks.

GOR002804242
Data Communications and Networking by Behrouz A. Forouzan
Behrouz A. Forouzan
Used - Very Good
Hardback
McGraw-Hill Education - Europe
2003-10-01
944
0071232419
9780071232418
N/A
Book picture is for illustrative purposes only, actual binding, cover or edition may vary.
This is a used book - there is no escaping the fact it has been read by someone else and it will show signs of wear and previous use. Overall we expect it to be in very good condition, but if you are not entirely satisfied please get in touch with us.