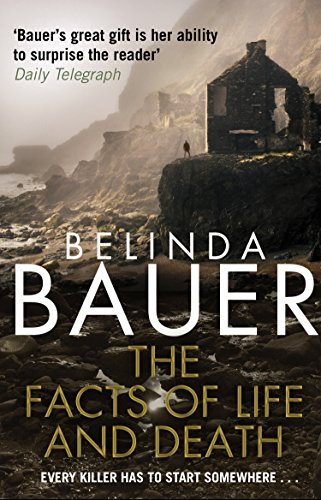 The Facts of Life and Death
by Belinda Bauer

FROM THE CRIME WRITER LONGLISTED FOR THE MAN BOOKER PRIZE 2018

'Bauer's great gift is her ability to surprise the reader .

The Facts of Life and Death Summary

The Facts of Life and Death by Belinda Bauer

FROM THE CRIME WRITER LONGLISTED FOR THE MAN BOOKER PRIZE 2018

'Bauer's great gift is her ability to surprise the reader . . . She makes you think a bit differently about the world' Daily Telegraph

On the beaches and cliffs of North Devon, young women have become victims in a terrifying game where only one player knows the rules. And when those rules change, the new game is Murder.

But a madman on the loose feels very far from the crumbling, seaside home of ten-year-old Ruby Trick. Instead she lives in constant fear of school bullies, the dark forest, and the threat of her parents' divorce.

Helping her father to catch the killer seems like the only way to keep him close.

As long as the killer doesn't catch her first.

Customer Reviews - The Facts of Life and Death

The Facts of Life and Death Reviews

Bauer at her best . . . the true heir to the great Ruth Rendell * Mail on Sunday *
A new Belinda Bauer always goes straight to the top of my to-be-read pile. She's the most interesting crime writer in England today * Val McDermid *
Belinda Bauer's thrillers are always compelling, always original, always brilliant. I will rush to read anything she writes * Mark Billingham *
Belinda Bauer is one of the best British crime writers out there right now * Simon Kernick *
She writes so beautifully, plots so cleverly and exhibits a razor-sharp understanding of people and places * Literary Review *

Belinda Bauer grew up in England and South Africa and now lives in Wales. She worked as a journalist and a screenwriter before finally writing a book to appease her nagging mother.

For her debut, Blacklands, Belinda was awarded the CWA Gold Dagger for Crime Novel of the Year. She went on to win the CWA Dagger in the Library for her body of work. Her fourth novel, Rubbernecker, was voted Theakston's Old Peculier Crime Novel of the Year. Her eighth novel, Snap, was a Sunday Times bestseller. It was longlisted for the Man Booker prize and voted Crime & Thriller Book of the Year at the Specsavers National Book Awards.

Her books have been translated into twenty-five languages.

GOR006442170
The Facts of Life and Death by Belinda Bauer
Belinda Bauer
Used - Very Good
Paperback
Transworld Publishers Ltd
2015-01-15
400
0552779652
9780552779654
N/A
Book picture is for illustrative purposes only, actual binding, cover or edition may vary.
This is a used book - there is no escaping the fact it has been read by someone else and it will show signs of wear and previous use. Overall we expect it to be in very good condition, but if you are not entirely satisfied please get in touch with us.