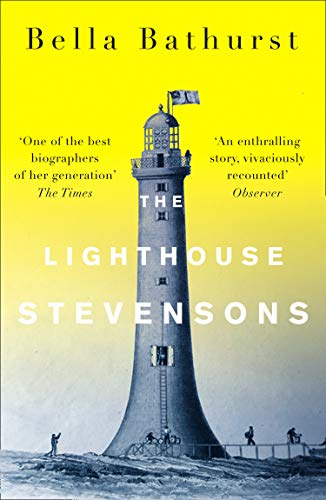 The Lighthouse Stevensons
by Bella Bathurst

An exciting new edition of Bella Bathurst's epic story of Robert Louis Stevenson's ancestors and the building of the Scottish coastal lighthouses against impossible odds.

The Lighthouse Stevensons by Bella Bathurst

An exciting new edition of Bella Bathurst's epic story of Robert Louis Stevenson's ancestors and the building of the Scottish coastal lighthouses against impossible odds.

`Whenever I smell salt water, I know that I am not far from one of the works of my ancestors,' wrote Robert Louis Stevenson in 1880. `When the lights come out at sundown along the shores of Scotland, I am proud to think they burn more brightly for the genius of my father!'

Robert Louis Stevenson was the most famous of the Stevensons, but not by any means the most productive. The Lighthouse Stevensons, all four generations of them, built every lighthouse round Scotland, were responsible for a slew of inventions in both construction and optics, and achieved feats of engineering in conditions that would be forbidding even today. The same driven energy which Robert Louis Stevenson put into writing, his ancestors put into lighting the darkness of the seas. The Lighthouse Stevensons is a story of high endeavour, beautifully told; indeed, this is one of the most celebrated works of historical biography in recent memory.

`Bella Bathurst has built a lamp herself: it illuminates the work of a literary hero, a family business, a habit of mind and a Scottish period... from the summit of this first terrific book she looks to become one of the best biographers of her generation'
Andrew O'Hagan, The Times

`An enthralling story, vivaciously recounted... These were epic and scarifying adventures, indicative of an age when the taming of nature was a philosophical given, its execution a religious passion'
Alan Taylor, Observer

`This is a grand book doing for lighthouses what Dava Sobel's Longitude did for marine chronometers, and doing it, if comparisons are to be made, with considerably more panache'
Nicholas Bagnall, Sunday Telegraph

Bella Bathurst is a freelance journalist whose portfolio includes work for the Observer, Telegraph, Sunday Telegraph, Independent on Sunday, Guardian, Scotsman and Scotland on Sunday. Her first book, The Lighthouse Stevensons: The Extraordinary Story of the Building of the Scottish Lighthouses by the Ancestors of Robert Louis Stevenson, was widely acclaimed. She published her first novel `Special' was published in 2003.

GOR001088920
The Lighthouse Stevensons by Bella Bathurst
Bella Bathurst
Used - Very Good
Paperback
HarperCollins Publishers
2005-03-07
304
0007204434
9780007204434
N/A
Book picture is for illustrative purposes only, actual binding, cover or edition may vary.
This is a used book - there is no escaping the fact it has been read by someone else and it will show signs of wear and previous use. Overall we expect it to be in very good condition, but if you are not entirely satisfied please get in touch with us.