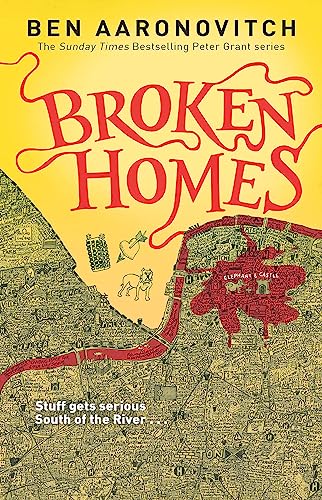 Ben Aaronovitch has stormed the bestseller list with his superb London crime series. A unique blend of police procedural, loving detail about the greatest character of all, London, and a dash of the supernatural.

A mutilated body in Crawley. Another killer on the loose. The prime suspect is one Robert Weil - an associate of the twisted magician known as the Faceless Man? Or just a common garden serial killer?

Before PC Peter Grant can get his head round the case, a town planner going under a tube train and a stolen grimoire are adding to his case-load.

So far so London.

But then Peter gets word of something very odd happening in Elephant and Castle, on an housing estate designed by a nutter, built by charlatans and inhabited by the truly desperate.

Is there a connection?

And if there is, why oh why did it have to be South of the River?

Full of warmth, sly humour and a rich cornucopia of things you never knew about London, Aaronovitch's series has swiftly added Grant's magical London to Rebus' Edinburgh and Morse's Oxford as a destination of choice for those who love their crime with something a little extra.

For all the murder and mayhem, this is a darkly comic read with characters you can't help but like. THE SUNDAY EXPRESS

GOR005761111
Broken Homes: The Fourth Rivers of London novel by Ben Aaronovitch
Ben Aaronovitch
A Rivers of London novel
Used - Very Good
Paperback
Orion Publishing Co
2014-05-08
368
0575132485
9780575132481
N/A
Book picture is for illustrative purposes only, actual binding, cover or edition may vary.
This is a used book - there is no escaping the fact it has been read by someone else and it will show signs of wear and previous use. Overall we expect it to be in very good condition, but if you are not entirely satisfied please get in touch with us.