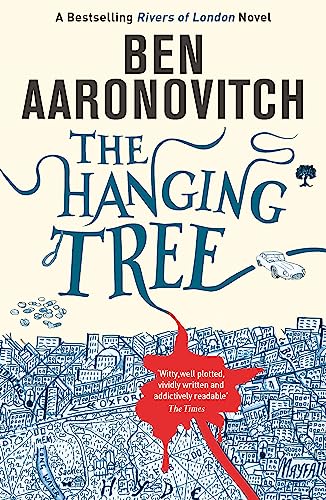 The Hanging Tree
by Ben Aaronovitch

Used Price
2,99 £
New RRP 8,99 £
Free Shipping in the UK
The sixth outing for PC Peter Grant in this bestselling series sees him back in London and facing up to the terrifying legacy of London's hangings.
Very Good Good Well Read

The Hanging Tree: The Sixth Rivers of London novel by Ben Aaronovitch

Suspicious deaths are not usually the concern of PC Peter Grant or the Folly, even when they happen at an exclusive party in one of the most expensive apartment blocks in London. But Lady Ty's daughter was there, and Peter owes Lady Ty a favour.

Plunged into the alien world of the super-rich, where the basements are bigger than the house and dangerous, arcane items are bought and sold on the open market, a sensible young copper would keep his head down and his nose clean. But this is Peter Grant we're talking about.

He's been given an unparalleled opportunity to alienate old friends and create new enemies at the point where the world of magic and that of privilege intersect. Assuming he survives the week . . .

Ben Aaronovitch is a master of metropolitan magical mayhem and the action is delightful. This is a tight thriller that is compelling and buckets of fun. * STARBURST *
The Hanging Tree is definitely one of the best in the Grant/Aaronovitch pantheon. There again, so have most of the previous books in the series and the odds are the next one probably will be too. -- The Bookbag
Aaronovitch deftly balances urban fantasy with the police procedural. As for Grant, he's a wonderful blend of laconic copper and, methodically researching how magic works, full-on nerd. -- Crime Scene
This series is brilliant! -- Teen Librarian

GOR008577803
The Hanging Tree: The Sixth Rivers of London novel by Ben Aaronovitch
Ben Aaronovitch
A Rivers of London novel
Used - Very Good
Paperback
Orion Publishing Co
2017-07-11
400
0575132574
9780575132573
N/A
Book picture is for illustrative purposes only, actual binding, cover or edition may vary.
This is a used book - there is no escaping the fact it has been read by someone else and it will show signs of wear and previous use. Overall we expect it to be in very good condition, but if you are not entirely satisfied please get in touch with us.