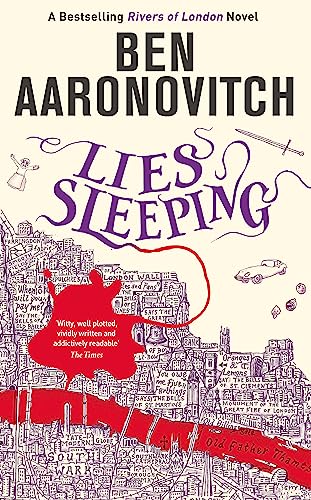 A deadly history.
A dangerous mystery.
And a dark plan coming to light.

IN LONDON, THE PAST IS NEVER DEAD.
IT ONLY...

Martin Chorley - aka the Faceless Man - wanted for multiple counts of murder, fraud and crimes against humanity, has been unmasked and is on the run. Peter Grant, Detective Constable and apprentice wizard, now plays a key role in an unprecedented joint operation to bring Chorley to justice.

But even as the unwieldy might of the Metropolitan Police bears down on its foe, Peter uncovers clues that Chorley, far from being finished, is executing the final stages of a long term plan. A plan that has its roots in London's two thousand bloody years of history, and could literally bring the city to its knees.

To save his beloved city Peter's going to need help from his former best friend and colleague - Lesley May - who brutally betrayed him and everything he thought she believed in. And, far worse, he might even have to come to terms with the malevolent supernatural killer and agent of chaos known as Mr Punch...

THE 'RIVERS OF LONDON' NOVELS HAVE SOLD OVER TWO MILLION COPIES.
DISCOVER WHY THIS IS ONE OF THE MOST-LOVED BOOK SERIES BEING WRITTEN TODAY.

'As brilliant and funny as ever'
Sun

'An incredibly fast-moving magical joyride for grown-ups'
The Times

'A darkly comic read with characters you can't help but like.'
Sunday Express

Ben Aaronovitch is a master of metropolitan magical mayhem and the action is delightful. This is a tight thriller that is compelling and buckets of fun. * STARBURST *
Once you start, you'll find a London that's just dying to be explored. * DEN OF GEEK *
Aaronovitch has outdone himself this time - it's the best book of the series thus far, and that's no mean feat. * IRRESPONSIBLE READER *
The Hanging Tree is definitely one of the best in the Grant/Aaronovitch pantheon. There again, so have most of the previous books in the series and the odds are the next one probably will be too. -- The Bookbag
Aaronovitch deftly balances urban fantasy with the police procedural. As for Grant, he's a wonderful blend of laconic copper and, methodically researching how magic works, full-on nerd. -- Crime Scene
Aaronovitch is writing proper police procedural novels, which are at the same time proper novels about the myths and legends of London. His characters are ones you'll want to come back to, his plots are convincingly contemporary and his humour is well-judged. Altogether, this is one of the most satisfying series currently available. * MORNING STAR *
It feels like Aaronovitch is scaling up to something big and series ending. But not too soon, please, because getting there is so delightful. * LOCUS MAGAZINE *
This series is brilliant! -- Teen Librarian

GOR010313815
Lies Sleeping: The Seventh Rivers of London novel by Ben Aaronovitch
Ben Aaronovitch
A Rivers of London novel
Used - Like New
Paperback
Orion Publishing Co
2019-05-14
416
1473207835
9781473207837
N/A
Book picture is for illustrative purposes only, actual binding, cover or edition may vary.
This is a used book - there is no escaping the fact it has been read by someone else and it will show signs of wear and previous use. Overall we expect it to be in very good condition, but if you are not entirely satisfied please get in touch with us.