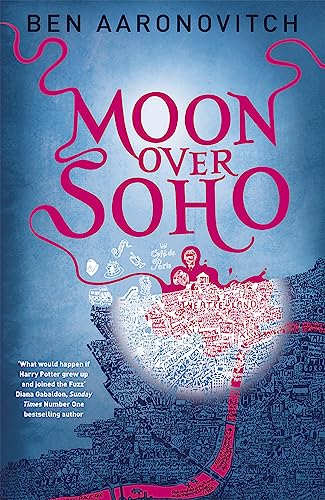 Moon Over Soho
by Ben Aaronovitch

Moon Over Soho: The Second Rivers of London novel by Ben Aaronovitch

I was my dad's vinyl-wallah: I changed his records while he lounged around drinking tea, and that's how I know my Argo from my Tempo. And it's why, when Dr Walid called me to the morgue to listen to a corpse, I recognised the tune it was playing. Something violently supernatural had happened to the victim, strong enough to leave its imprint like a wax cylinder recording. Cyrus Wilkinson, part-time jazz saxophonist and full-time accountant, had apparently dropped dead of a heart attack just after finishing a gig in a Soho jazz club. He wasn't the first.

No one was going to let me exhume corpses to see if they were playing my tune, so it was back to old-fashioned legwork, starting in Soho, the heart of the scene. I didn't trust the lovely Simone, Cyrus' ex-lover, professional jazz kitten and as inviting as a Rubens' portrait, but I needed her help: there were monsters stalking Soho, creatures feeding off that special gift that separates the great musician from someone who can raise a decent tune. What they take is beauty. What they leave behind is sickness, failure and broken lives.

And as I hunted them, my investigation got tangled up in another story: a brilliant trumpet player, Richard 'Lord' Grant - my father - who managed to destroy his own career, twice. That's the thing about policing: most of the time you're doing it to maintain public order. Occasionally you're doing it for justice. And maybe once in a career, you're doing it for revenge.

"A terrific follow-up to [Aaronovitch's] novel "Midnight Riot", the debut of Peter Grant and his own weird London. Grant continues to learn the ropes of magical London, a process that takes him on a trip through Nightingale's haunted past and into some of the most interesting places you won't find on any official tour. Aaronovitch makes the story sing, building momentum until the ending is literally breathless." --SF Revu"A realistic modern-day police procedural populated by increasingly solid characters and written in the same consistently witty style as the first Peter Grant novel ["Midnight Riot"]. . . . One of the most entertaining books I've read in a long time." --Fantasy Literature

GOR003311066
Moon Over Soho: The Second Rivers of London novel by Ben Aaronovitch
Ben Aaronovitch
A Rivers of London novel
Used - Very Good
Paperback
Orion Publishing Co
2011-10-13
384
0575097620
9780575097629
N/A
Book picture is for illustrative purposes only, actual binding, cover or edition may vary.
This is a used book - there is no escaping the fact it has been read by someone else and it will show signs of wear and previous use. Overall we expect it to be in very good condition, but if you are not entirely satisfied please get in touch with us.