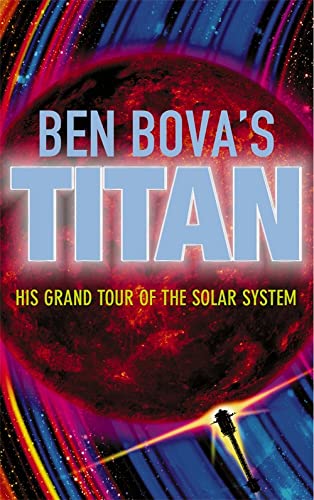 In Stock
£5.49
Ben Bova's Tour of the Solar System continues with this thrilling new novel
Very Good
Only 2 left

Titan Alpha has landed: the most complex man-made object to reach Saturn's largest moon. The ten thousand men and women of Habitat Goddard are once more at the frontier of science.

From their huge, artificial paradise hanging in orbit above Saturn, some of them dream of landing on Titan's surface. Others will do anything to prevent such a landing. And yet others have darker, secret plans.

But almost immediately, Titan Alpha goes silent. And minor, inexplicable faults start to affect Goddard. Is there a basic design flaw that could threaten the lives of everyone on board? Or has one of the many malcontents exiled to space decided to sabotage the probe or even the whole expedition?

'Bova continues his tour of the solar system with this novel about titan, one of the moons of Saturn. Bova's near future extrapolation on man's expansion through our solar sustem is redolent of Arthur C Clarke's finest work, as well as that of Isaac Asimov and Gregory Benford.' * The Bookseller *
The science fiction author who will have the greatest effect on the world. * Ray Bradbury *
A masterful storyteller * Vector *
Fun, thought-provoking, pacy and stylish . . . Gives a good read while turning your eyes to what might be in the not so distant future, just like Clarke and Asimov used to do so well. * SFX on VENUS *
A splendid book . . . of his many books, Mars must be the most important. * Arthur C. Clarke *
Vivid, poetic and wonder-provoking. * Foundation on JUPITER *

An award-winning editor, President Emeritus of the National Space Society and a Fellow of the British Interplanetary Society, Ben Bova is also the author of more than one hundred futuristic novels and non-fiction books. He and his wife live in Florida.

GOR001067550
Titan by Ben Bova
Ben Bova
Used - Very Good
Paperback
Hodder & Stoughton General Division
2006-06-19
512
0340823976
9780340823972
N/A
Book picture is for illustrative purposes only, actual binding, cover or edition may vary.
This is a used book - there is no escaping the fact it has been read by someone else and it will show signs of wear and previous use. Overall we expect it to be in very good condition, but if you are not entirely satisfied please get in touch with us.