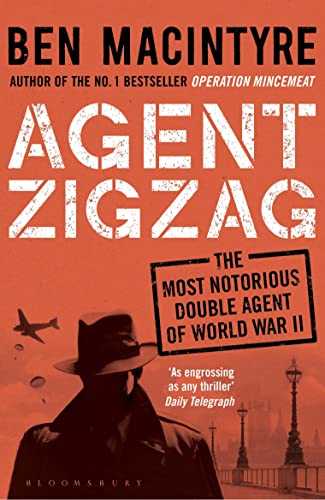 In Stock
£8.99
'If you're looking for a good spy thriller, I definitely recommend this' Daily Express The thrilling real-life story of a double agent in the Second World War
Like New Very Good Good
Only 1 left

One December night in 1942, a Nazi parachutist landed in a Cambridgeshire field. His mission: to sabotage the British war effort. His name was Eddie Chapman, but he would shortly become MI5's Agent Zigzag. Dashing and louche, courageous and unpredictable, the traitor was a patriot inside, and the villain a hero. The problem for Chapman, his many lovers and his spymasters was knowing who he was. Ben Macintyre weaves together diaries, letters, photographs, memories and top-secret MI5 files to create the exhilarating account of Britain's most sensational double agent.

'This is the most amazing book, full of fascinating and hair-raising true life adventures ... it would be impossible to recommend it too highly' * Mail on Sunday *
'Superb. Meticulously researched, splendidly told, immensely entertaining and often very moving' * John le Carre *
'It is unlikely that a more engaging study of espionage and deception will be published this year' * The Times *
'Macintyre tells Chapman's tale in a perfect pitch ... Macintyre never misses a delightful, haunting or terrifying detail ... Buy it for dads everywhere but read it too' * Observer *

Ben Macintyre is a columnist and Associate Editor on The Times. He has worked as the newspaper's correspondent in New York, Paris and Washington. He now lives in London with his wife and three children. Agent Zigzag is his fifth book.

GOR009912891
Agent Zigzag: The True Wartime Story of Eddie Chapman: Lover, Traitor, Hero, Spy by Ben Macintyre
Ben Macintyre
Used - Like New
Paperback
Bloomsbury Publishing PLC
2016-09-22
384
1408885409
9781408885406
N/A
Book picture is for illustrative purposes only, actual binding, cover or edition may vary.
The book has been read, but looks new. The book cover has no visible wear, and the dust jacket is included if applicable. No missing or damaged pages, no tears, possible very minimal creasing, no underlining or highlighting of text, and no writing in the margins.