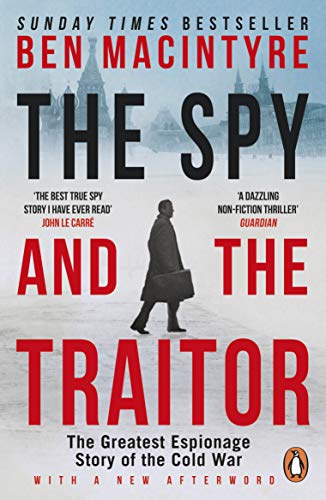 The Spy and the Traitor
by Ben MacIntyre

The Spy and the Traitor Summary

The Spy and the Traitor: The Greatest Espionage Story of the Cold War by Ben MacIntyre

*The No.1 Sunday Times Bestseller*
*Shortlisted for the 2018 Baillie Gifford Prize*

A thrilling Cold War story about a KGB double agent, by one of Britain's greatest historians - now with a new afterword

On a warm July evening in 1985, a middle-aged man stood on the pavement of a busy avenue in the heart of Moscow, holding a plastic carrier bag. In his grey suit and tie, he looked like any other Soviet citizen. The bag alone was mildly conspicuous, printed with the red logo of Safeway, the British supermarket.

The man was a spy. A senior KGB officer, for more than a decade he had supplied his British spymasters with a stream of priceless secrets from deep within the Soviet intelligence machine. No spy had done more to damage the KGB. The Safeway bag was a signal: to activate his escape plan to be smuggled out of Soviet Russia. So began one of the boldest and most extraordinary episodes in the history of spying. Ben Macintyre reveals a tale of espionage, betrayal and raw courage that changed the course of the Cold War forever...

The Spy and the Traitor Reviews

The best true spy story I have ever read -- John le Carre
[A] captivating espionage tale. In a feat of real authorial dexterity, Macintyre accurately portrays the long-game banality of spycraft-the lead time and persistence in planning-with such clarity and propulsive verve that the book often feels like a thriller. Macintyre has produced a timely and insightful page-turner. * Publishers Weekly *
Meticulously researched, splendidly told, immensely entertaining and often very moving -- John le Carre on 'Agent Zigzag'
Impeccably researched, superbly told - by far the best book on the SAS in World War II -- Antony Beevor on 'SAS'
Thrilling. Ben Macintyre is the ideal narrator * Spectator on 'SAS' *
Thorough and highly entertaining. It would be nigh on impossible to praise it too highly * Daily Express on 'SAS' *

Ben Macintyre is the multimillion-copy bestselling author of books including Agent Zigzag, Operation Mincemeat and A Spy Among Friends. He is a columnist and Associate Editor at The Times, and has worked as the newspaper's correspondent in New York, Paris and Washington. He regularly presents BBC series based on his acclaimed books.

GOR009867424
The Spy and the Traitor: The Greatest Espionage Story of the Cold War by Ben MacIntyre
Ben MacIntyre
Used - Very Good
Paperback
Penguin Books Ltd
2019-05-30
384
0241972132
9780241972137
N/A
Book picture is for illustrative purposes only, actual binding, cover or edition may vary.
The book has been read but remains in clean condition. All pages are intact and the cover is intact. Some minor wear to the spine.